Under God and now quite divisible... 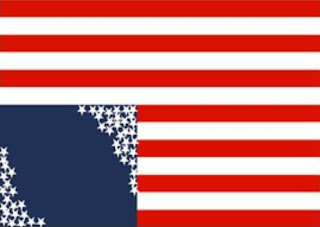 Reading a piece recommended to me by Mr Blake, I tangentially came across yet another argument for seeing EuroAmericans --aka, actual Americans-- as a distinct and different nationality from Africans in America.


...it’s revealing to ask whether African-Americans should feel guilty for America’s history of slavery and Indian displacement.   The answer, of course, is “no”, no one would imagine that blacks should feel guilty for stuff white Americans once did*.  But this is proof, is it not, that their identity is different from mine–since I of course should feel guilty, even though my ancestors came to America just in time to fight for the Union–and that what are called the crimes of America really mean the crimes of white people.  Race is really a more salient category than citizenship.

My ex, a man of African descent (among several other lines) not only refused to identify as an American, but often even as an earthling. And being gay, he fled the Black world to live among less hostile Whites. However, on an ill-fated trip to France, beguiled by the myth of Josephine Baker into hoping he could make a life there, he discovered that he was not at home among Europeans, being too..."American." Yet it was not being American he discovered; just that he could only ever be a guest in the motherland of another race. I used to try to convince him to accept his American-ness. I was wrong.  His profound sense of alienation was right.

I sometimes find that simple questions are far more revealing than complex essays. When people get all furrow-browed about, say, what constitutes White identity and go off into chromosomal research and the vagaries of history and immigration, etc, I think that Tonto's Razor really clears the field: if an accusation of racism can be laid against you, you're White**. Like it or not, it is mostly Us against all of Them.

And the author of the above fragment largely agrees with me, on his own grounds, that White people are best defined as "Caucasians from historically Christian cultures."

He is a painfully clear-eyed commentator on the cultural implosion we are living through, especially as it impacts Catholicism. And he is a rarity, a self-described Catholic racist.


*Part of the Race Game As She Is Played, though, is to triumphally include Blacks in, say, the Western cowboy saga --See? We're part of that, too, and you shouldn't keep hiding us-- but to exculpate Blacks from any responsibility for their participation. Only Whites are ever culpable, Blacks are either survivors, if called for, or victims...forever.


**I have a good friend of Asian extraction who was accused of racism by an African-in-America. This is an exceptional case, because Asians are so hyper-White in behavior and make the gap between Africa and everywhere else on the planet so clear. It'd be interesting to see if a Black could pull off a "racism" gig against a mestizo Hispanic?

It will take a lot before our fellows of blood realize that they are not friends with their accusers. By the way, why are we called Caucasian? I would think that European is good and distinct from Caucasian. Also, while Caucasian can expand into Turkey and Iran, were there to be less of a semitic influence, would that reasonably extend out to Pakistan? If not, what would that area be called other than the "middle east?" Turkistan(since they are all Turkic?) meh, nobody who led to these trends really gives a shit about anthropology so it is probably a waste of time. I just don't consider Europeans to be Caucasian. Caucasians are no more European than Russians are. PC, as usual, at odds with what likely is. Also as usual, even I find myself settling for the phrase every once in a while to make things easier.

A, I would quibble that the Russians are not European- at least, not at least partly European. History is filled with Scandinavians and Germans who married and lived among Russians, and even came to consider themselves one and the same as their hosts. East Slavic culture was first propagated by a Viking elite class; Catherine the Great was said to speak better Russian and act more Russian than her own husband, and she was German.

The Russians are liminal; they have been, and will always be, the gray zone between Europeans and Asians. It was the conversion of the Kievan Rus' by Vladimir the Great that marked the Russians as the last bastion of Europe, and not an encroaching Asiatic flank, as would have happened if they had adapted, say, Judaism from the Khazars, or Islam from the Bulgars, or perhaps if Buddhism from the Mongols had permanently displaced Christianity. Great leaps of cultural and technological development have always come from the Russians looking Westward; yet their roots in the Asiatic step tribes, the Scythians and Tartars, is undeniable.