Western dhimmmitude amongst the elites.
Beyond contemptible.

Watching Vito Russo's* "Celluloid Closet" on TV. Images of homosexuals in films, mostly prior to Stonewall. Images of desperation and degeneracy. All that was available to me for most of my younger years.

He mused once on the man of his dreams, his fantasy lover, the Great Dark Man. His words embody the deadend of self-hating homosexuality. I wish I could say it was only from a bygone era.

*I got to meet Vito several times in the last year or two before he died in 1990. He was a gay celebrity and I was no one in particular (though my partner then was kind of a somebody) and he was unfailingly friendly to me, going out of his way to say hello and smile and chat me up. A sweet man.

And Carter Burwell's theme music from his film still moves me.

Oscar Wilde, who converted to Catholicism on his deathbed, apparently had a good opinion of the old Church of Rome prior to his difficult demise. He once opined that "the Roman Church is made for saints and for sinners...for respectable people, the Anglican Church will do."
at 7:40 PM 0 comments

It's Shark Week on the Discovery Channel.

A treat. Archetypal American Guy Mike Rowe does an episode of Dirty Jobs where he has to swim with reef sharks. But before he gets into the wet suit and armor, he lolls around on the boat in nothing but his trunks for quite a while. 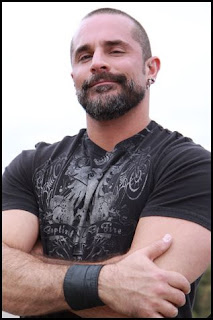