I find it very hard to believe that the United States of America will not, at some point in this century, implode. I can't get myself to see it as sustainable anymore. The combination of demographic change and culturally/legally entrenched ideological frame simply does not point to flourishing, much less survival.

The internal conflicts and mutual loathing between the residents of the land match those that brought about the First Civil War. And like that first one, they form around race.

I have come to view the USA as another Yugoslavia, an artificial amalgam of hostile peoples who do not belong together in a single polity, the incubator of two (or more) different nations.

If, for example, you look at White, Black and Hispanic "Americans" as groups, do you really see anything like a commonly felt nationality? Really? Despite the Potemkin Village view of races you see endlessly in the media, from commercials to movies, real life is not like that at all. Regardless of contemporary political arrangements and borders, do they not strike you as more like three (at least) completely different nations-in-the-making?

So I fantasize about a new country, a Second Republic, symbolized by new flags, emerging some day out of the wreckage of the old. 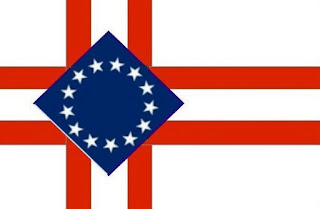 The first (flag above) is relatively conservative
as secessionist dreams go:
The Seven Pillars of Liberalism
severely cracked,
but keeping a lot of continuity with the old USA
and its founding Constitution. 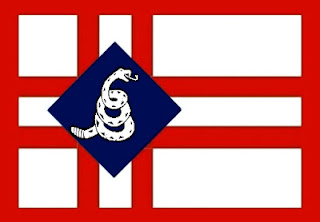 The second is more agitated.
Red, white and blue still,
but feeling the toxicity of What Makes Liberalism Tick.
The stars of the original flag are replaced by
the Gadsden rattlesnake
inside a sharp-edged diamond shape
and the border is blood red.

Or this,
more primitive, unapologetic and authentic America: 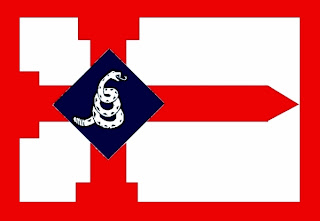 The third (below) is so disappointed that it doesn't want to be bothered about continuity.
Frankly reactionary. Or archeofuturist, as they say. 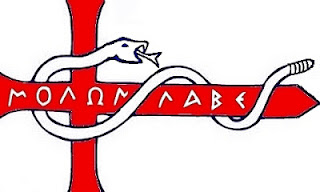 Is that a cross or a sword? Or both?
It's pretty much about far older roots and a belligerent attitude.
The motto of the Spartans, "Molon labe",
is the Greek version of "Don't Tread On Me."