I do have an element of OCD in my character. Not enough to make me dust very often. But I do like order. In typical fashion, I will avoid an unpleasant task that actually needs doing by instead cleaning or arranging something unnecessary . When it comes to clothing, no one would call me fastidious but there are a few things I like and some that set my teeth on edge.

Watching the TV series Hannibal, the Hannibal character dresses very formally and in a certain kind of high European style. Not appealing, but noticeable.

His tie irritates me. It's done in a double Windsor, which makes for a wide and prominent knot. But he doesn't often dimple it. Undimpled ties irritate me. I wanna grab em and fix em. 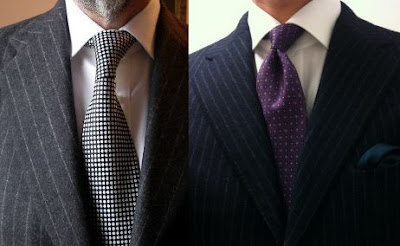 I also hate it when shirt collars that should be under and inside the suit jacket stick outside. That's just disorderly.

But the dimple/non-dimple thing. No clue why.