I finally came up with an image that encapsulates my increasing discomfort with White adulation of Martin Luther King.

King was a Trojan Horse. 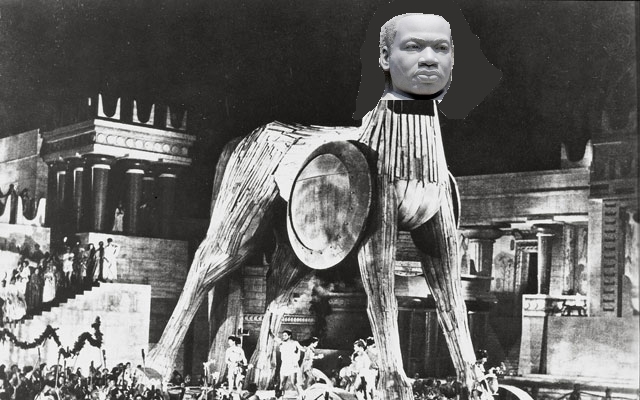 In Virgil's Aeneid, describing the end of the ten-year war between the Trojans and the Greeks, The Trojans think they are bringing a sacred object into their walled city, but what it contains is their downfall.

Gives a new interest to the famous and artistically influential statue which shows the end of the one man who tried to warn his fellow Trojans that the horse was a death-trap. "Equo ne credite! Don't fall for the horse." He gave us our phrase about "Greeks bearing gifts": Timeo Danaos et dona ferentes. Laocoön and his sons

Almost all of the US buys the cult of St Martin the Martyr as an American icon deserving his holy day and his Washington shrine. But this is what he really was: a Black nationalist icon as fully as the Black Muslim Malcolm X. King sanctified the whole false discourse and fraudulent ideology of "racism", which will permanently hobble us and eventually erase us unless we escape from its deathgrip.

White conservatives and liberals alike claim King as a Good Negro* whom Whites can conscientiously admire, thus granting them conditional absolution from the "sin" that he was able to make them believe constituted their basic racist nature.


Celebrating King --like celebrating Mandela, or even Ghandi--is essentially a thanksgiving to him for saving the (White) nation from its evil self*, awakening us to a crime that rendered all our achievements a hypocritical nullity, putting us forever in his debt for showing us our true nasty faces while dangling in front of us the possibility of pardon, if we were to rid ourselves of our "racism."

The last 50 years have show that this indulgence is only available to Democrats, only on a contingency basis and for good behavior, much of which consists of attacking other Whites for being "racist." Were the Liberals and the Blacks able to do it, our calendar would date from 1963, with everything prior to it consigned to the dustbin of oppressive Eurocentric history.

By the way, it makes not one whit of difference if the historical King was indeed the sainted humanist we are asked to believe in. It makes as little difference were the historical Marx to be revealed as a pacifist humanitarian: Marxism has a life and a reality which completely overwhelms its originator. Some child on the YouTube comments chastised me for connecting Mao and the Kims with Marx, on grounds that only Lenin and Trotsky were real Marxists, the rest were just Stalinists, etc. News flash: Marxism has an actual historical face. It is what it has shown itself to be, not what you think it should have been.

Same with the much adored "civil rights movement." Whoever King was or wanted to be, he is now utterly wrapped up in the war for Black power that goes by that misleading name.  If you look at his Maoist memorial, you can see the arm-folded anger and resentment, literally carved in stone. "The Debt", as arch-Black-whiner Randall Robinson will tell you, is eternal.

Like the doomed Trojans, Nice White People think that in praising MLK they are bringing a sacred object into their society. But what is actually hiding inside it --as the last half century has shown-- are the Farrakhans, the Sharptons, the Jacksons, the Obamas, the Holders, the NAACP, the Congressional Black Caucus and Detroit.

They are his people, not us.

He belongs to them.
And I say, let him go.

I engaged in a little act of political iconoclasm with my father on MLK day. I told him that he believed in using the quotes to enforce racial quotas, and his association with Planned Parenthood. The former discomforted him, the latter disturbed him. His eyes grew wide as saucers when I told him.

"Is that true?" He asked me.
"Yep, they gave him an award. He said Sanger's work was comparable to the civil rights movement."
"That's incredibly disturbing."
"I hate to say it Dad, but if he hadn't died, I'm not sure we would be sitting here talking in such nice terms about him. He probably would've been as big of a race merchant as Jackson and Sharpton."
"You're probably right, Sean."

Slowly but surely, I think people are waking up and realizing that they got sold a bill of goods that hasn't been delivered yet. They'll have their own explanations for why it is, but the fact remains: what we were promised is not what we got.