Although B votes for Democrats and I loathe Democrats, we hardly ever discuss politics. He is in some ways, by temperament and culture, rather more conservative than his voting pattern. Compared to his professional cohort of post-secondary teachers, he is a rank troglodyte. But when I start talking about illegal immigration, he virtually hangs up the phone. Fair enough. I feel the same way when he talks about crop rotation or Rigoberta Menchu.

Anyway, just to remind my dozens of readers about why this issue makes me nuts, a reprint:

Seven reasons why the contemporary Hispanic invasion of immigration to America is bad. Bad. Bad.

Illegality: How can it be a good thing for us if your first literal contact with us is breaking our laws? It is an aggressive act of disrespect. It is home invasion on a national scale. Left unpunished, (and now even rewarded) it promotes contempt for us and makes our sovereignty a joke. Plus, it insults people who are dumb enough to use the ordinary immigration process. These Hispanics are illegal and they are alien. As the queens say, Deal with it.

Homogeneity: the single linguistic bloc makes them very powerful and influential, allowing both a split of the US into a bilingual country and continuous resident populations who speak an alien language.

"Balkanicity": with the history of race-conscious ill-will between the USA and Mexico, this massive group of illegal Hispanics superheats the Balkanizing of our country into inimical ethnic tribes.

Insecurity: Post-MLK America (White America) has lost its moral self-confidence and any hope of the decreasing White majority asserting itself to foreign immigrants. The rot of multiculturalism has eroded a common Anglo culture that once might have required adaptation from these invaders, if not supported their expulsion.

Futurity: Although many first-generation illegals may be more focused on work and money, with clear experience that a hard life in America is way better than the insecure dead-end hovels they fled, their children born here, who will mostly not excel, will see what they don't have and how they don't belong in either place. Nothing good comes of this new alienated underclass, who will learn the culture and tactics of endless grievance from the Blacks.

Put 'em all together. It's not pretty. Not pretty at all. 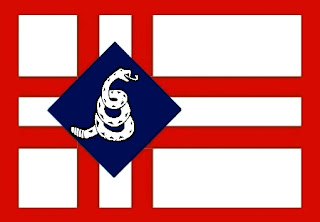 There's a reason
that the flag of the post-American Commonwealth
--where "multiculturalism" would be a dirty word--
is bordered in blood red.
In a reversal of the Communist style,
you'd be free to leave at any time,
but trying to get in without permission
would get you shot.

PS. These seven disasters are not the only reasons why MexAmerica is a dead-end. Another is that their presence and eventual amnesty --do you really expected the feckless GOP to hold out forever?-- will cement the dominance of the Democrats. One more Obama after another.

So how in the world does a conservative gay man date in the overwhelmingly liberal gay community? I'm guessing a bulletproof vest is a requirement? :D

But seriously, how does it work? Do you reveal your political orientation while he's drunk? Taking his mind off of the shock by having blisteringly hot sex afterwards? Start dating three years before a national election? Find a guy who has already forgiven you for the other parts of you he doesn't like? Just not talk about it? I know this is a problem not unique to gay couples, but as Jack Donovan colorfully put it, "gay conservatives are as rare as leprechauns," and my options will already be limited by my masculinity criterion. I think I could truly love a guy who happened to be liberal, as long as he didn't support a couple things that I consider deal breakers; I'm just worried that a liberal guy would be so wrapped up in his ideology that he could never get past my political views and end the relationship.

I defer to your infinitely greater experience in this department.

Dating advice from anyone is fraught with peril.

After that, you have to sense if the guy's identity is wedded to his (probably Democrat) politics or if he could tolerate your difference because politics is not so central for him.

Or if you could.