As James Burnham himself wrote, the sentence that I have called Burnham's Law really does explain everything about liberalism; his book is mostly an elaboration:

"The liberal, and the group, nation, or civilization infected by liberal doctrine and values, are morally disarmed before those whom the liberal regards as less well off than himself."

Once infected, --and infection is the correct term*--the liberal mind is morally disarmed.

It cannot defend itself, on ethical grounds, the grounds that liberals most revere, in theory. The liberal person or group then becomes wholly and entirely controlled by the Victimized Other. Once morally disarmed, you cannot even think, much less ever say: "It's your own fault." or "It's not my problem." The liberal is yoked to the chosen sufferer in complete servility. Any refusal to accommodate immediately returns the privileged liberal to the camp of the Oppressors.

The people who provoke this paralysis are those whom 1) the liberal regards as 2) less well off than himself. It is the liberal's perception which determines this. And the only perception which matters is advantage vs disadvantage...in the liberal's own terms. And advantage and disadvantage must be seen either as arbitrary (in which case the advantaged liberal cannot merit what he has) or as criminal (in which case the liberal, or his ancestors or culture, has gained the advantage by immoral, unjust and unfair means and must give it up in reparation).

That's really all you need to know. 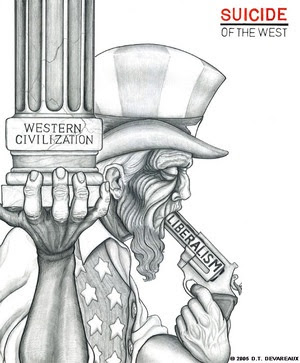 It is, as advertised by Mr Burnham, way back in 1964, the ideology of Western suicide.

And I wonder, of late, in the wake of Nov 6th's re-election of the Obamanation of desolation, if only a radically unliberal stance, one which violates fundamental canons of liberal culture, can resist it.

*I interpret liberalism as a toxic secularized degeneration of the suicidal energies in Christianity, where atonement for sin finally requires God to kill himself in the person of his Son.

And given the hugely disproportionate role of Jews --most especially non-religious Jews-- in creating, maintaining and enacting the liberal agenda, a toxic secularized degeneration of the suicidal/masochistic energies in Judaism, the Deuteronomic theology which interprets all Jewish suffering as earned retribution for sinful unfaithfulness to the Jewish God: if bad things happen to me, I deserve them for being unethical. And if I feel unethical, then I deserve bad things to happen to me.