The scandal of particularity

That's a theological phrase. It refers to the resistance many people have to the idea that God, the creator of the universe, would enter human history in a very localized way. For example, choosing the Hebrews to be in a peculiar covenanted relationship with him. Or in Christianity, becoming incarnate in one man only and making him the gateway to salvation for the whole world.

For people who assume that a Big God would never restrict himself to such a particular and peculiar path, but would teach universal moral truths through the varied prisms of every religion, this is an outrage, an offense, a scandal.

Lots of Christian theologians nowadays simply assume that in our "global and multicultural post-colonial world", the assertion that only one religion (theirs) is true would be grotesque. They never notice, however, that certain other religions like, oh, I don't know, Islam hold exactly the same view and without qualification or apology. And even for the dharmic faiths, one would have to ask, if Hinduism were sufficient, why did Gautama go to all that trouble to get himself enlightened?  Etc. etc.

It's a Western disease, really, this vulnerability to the lure of the Generic Whole. The bimillenial+ stew of Athens, Jerusalem, Rome, Wittenberg, the Enlightenment and Marx/Freud tends to produce acute cultural indigestion among the tenderer sort.

I thought of this when I read the comments attached to this picture. 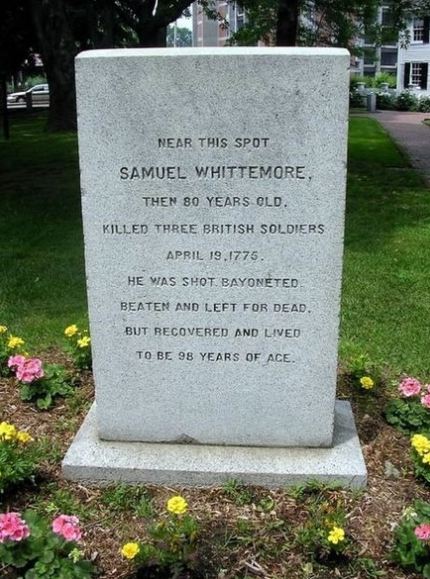 Most were healthily impressed. But one, a highminded Welsh schoolgirl of benevolent mean, sarcastically asked if the Yankee poster would post such a picture were the soldiers in question American rather than British. The assumption is that it's not fair to root for your own side.

And that is, after all, Robert Frost's definition of a liberal, someone who's too broad-minded to take his own side in an argument.

Part of what liberalism eats away at --in a very targeted way-- is particularity, so that --in a very particular way-- it becomes scandalous. What is scandalous, of course, is the West, or America, or men, or any of the Oppressor Classes preferring their own to The Other. I recall a distraught (White, of course) female journalist during the Iraq War asking, as if it were rhetorical, "Are American lives worth more than Iraqi lives?"

Well, duh. Yes, of course, lady. How do you imagine that any Iraqi, were the question reversed, would answer? This is a question that would be taken seriously only by White People: The Most Foolish People On The Planet (c).


*Thomas Aquinas did not believe the God loves everyone equally. Makes sense to me.
at 2:26 PM

Three examples of one kind of sloppy thinking:

1. It is wrong to claim that some things are wrong.

2. The religion that claims all religions are equally true is the only true religion.

All very well for our Protestant and Roman Catholic post-Christian theologians to hold that God has work'd through "all religions" to make available the same richly diverse "universal moral truths" that require Americans to support health care reform, work for hope and change, criticize capitalism, etc.

But why has this same God so richly bless'd Western Christianity with music, for instance, and left the other religions so comparatively bereft? Western Christendom even begat a rich "secular" culture that far exceeds other cultures in music and thinking.

Sure, we have crap "music" -- which maybe compares with the racket that Buddhist Tibetan monks make to frighten demons when the monks descend to do some ministry to the laity in return for the laymen's support. But does Buddhism have anything to compare with Palestrina and Bach? or even the better sort of popular hymns and Christmas carols? What was God thinking in being so unfair to the nonChristian religions?!

As even Saladin had to admit, "When you've heard the Adhan once, you feel like you've yeard it a million times."

Or again, we can't point to Buddhism's prayer wheels and not concede that Christianity has pious zonkings and devotional stultifications, such as getting the "Jesus prayer" rap going around and around in one's noggin. But where is Buddhism's un-zonking Divine Comedy or de-stultifying Provincial Letters? Where is Islam's Institutes of the True Religion that can kill Jungian shirk that way Calvin's Institutes kill'd Sevetus's anti-Trinitarianism by revealing the correlation of the Trinity with self-knowledge? ...

Even when it comes to severe odiousness "other religions" have to learn from us -- for instance, when Islam today goes all hog for the Protocols of Zion. They can't come up with an anti-semitism that compares with secularized Christianity's. (An unsecularist Christianity can't be strictly anti-semitic since Christianity needs Jews to re-probate Christian selfs, as Hegel says, and Leo Strauss agrees vis-a-vis one-sided presentations of the God-Man.) And in fact, the Jews of Islam and even of Eastern Orthodoxy don't compare with our Jews.

Ex Cathedra's word "grotesque" means "grotto-esque" -- sc suitable for placing in a grotto cave. Basically the other grottos don't have much going on in them.

Sure, one can rummage around in the Pali Canon and the Hadith and the Bhagavad-Gita in order to come up with texts to admonish children to be sociable, vote Democrat, support marriage equality until Shariah is imposed, etc. But why hasn't Allah inspired an Islamic Oratorio on Muhammad's running away to Medina that compares with Bach's St Matthew Passion?

"while God may --and I emphasize may-- love everyone equally, along with a few sainted Great Souls, abstracting from the tribal reality of life on God's earth is, for anyone neither an enlightened or Supreme Being, a recipe for suicide."

What I have sometimes thunk is that a being would have to omnipotent, or at least Invulnerable, to be able to possibly /afford/ to have love and compassion for all things/people equally.

Going from there... I wonder how much the liberal inability to prefer particular these over particular those... how it isn't necessary white "guilt" or "self-loathing" under it, as is often described, but really a power fantasy, an invulnerability fantasy.

And considering how the relevant PC dicta are always presented as something only an "uneducated" person would disagree with...it's a sort of status-marker. It's saying "I can afford not to be aligned with any particular people."

Yes, a new "power fantasy" school for Catholic Christendom! I go into this theme in my upcoming new book "From de Lubac to Kabul ed." ...

I wish B.C. had let me count competency in hate speech for one of my PhD language requirements.

Neo-Abbie Hoffman: "There is no god but Allah, and we did it for the kids."

"Afford" is the key word; only those who are so secure can do this-or those who want to pretend to be so secure. It's the postmodern "progressive" version of the aristocrat spending what he can't afford on something so that he'll be admired.

WWJD or WWJSay is an exercise that does not interest me. Amazingly, He usually winds up agreeing with the person asking the question.

However, I simply point out this, that Jesus in the Gospels, while he performs healings for Gentiles, usually at their request or even, as with the Canaanite woman, at her insistence, he restricts his ministry to "the lost sheep of the House of Israel." His much-vaunted table fellowship with sinners was limited to Jewish sinners. After his resurrection the horizon was expanded but he looked to his own people first.

He was not the sensitive, inclusive and diversity-loving hippy that modern liberal Christians imagine him to be.

So, you're argument is that Christianity must be true because the West has better music, in your opinion, than other cultures?