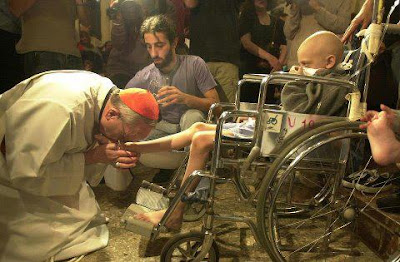 Much is being made of the new Pope's "humility and simplicity", seen in his shoes and his name and his pronouncements, as well as his bus-riding history in Argentina and glad-handing with parishioners . Having had twenty years of living with the occasional "humble" and "simple" monk, Ex Cathedra is suspicious of these things.

In matters of religion and authority, humility can be a tactic. Take Christ himself, for example.

At the Last Supper, in St John's version, he undertakes what is normally the work of a servant or slave, to wash the feet of the guests. In our culture, it is analogous to being a shoe shine boy. 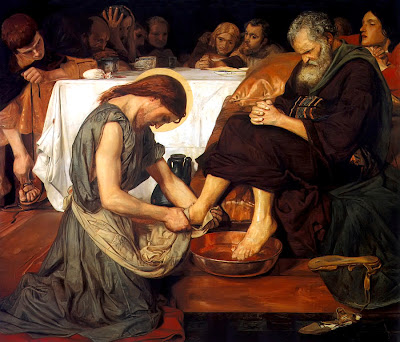 It's a big deal, and St Peter, true to form, resists and makes a fuss. It is very telling, though, that when Peter refuses to have Jesus do this for him, out of humility, the humble-gesture-making Jesus asserts his authority and tells him to either submit to the act or get out.

And then, when he's finished using his authority to force his disciples to submit to his act of humility --do you catch the irony ther?-- he returns to his place as their "Lord and Master." Having never, except in gesture, left it. True, he is on his way to his death, but that, too was his choice, not theirs. His submission to God, never to them.

This was not at all out of character. What liberal lovers of Jesus The Servant always forget is that the Jesus of the Gospels never submitted to any other authority than his own sense of God's authority. Not once. He never consulted or sought consensus.  He had no peers, no equals. None. And even in reflecting on his lowly gesture of foot-washing, he reminds the apostles that he is their "Lord and Master." This makes Jesus, IMHO, a very iffy model of service and humility for ordinary mortals. Similarly with popes.

Here we have the paradox of men of authority enacting momentary gestures of humility, but certainly not abdicating their place in the hierarchy. On the contrary, it is only their unquestioned authority, their higher rank in the range of dominance, that makes these gestures at all interesting. For them, acting humbly is a free choice, not an enforced condition. And so, while momentarily mimicking the role of a lower order, they actually re-enforce their higher place.

A Pope riding the bus is only interesting because that's not what Popes do. But if riding the bus becomes the regular thing, it loses all its interest.

So these touching gestures are all, in the end, tactics of power.

I'm not saying it's wrong. Not at all. I'm saying that it's not as simple as portrayed.

As I said, having lived for two decades among men who supposedly valued humility and simplicity, I am skeptical.