The RC Church has wholly bought into the post-war liberal vision of "universal human rights." Of course these are far from being universal, being utterly European. The current version of that continent's gift for imperialism. La mission civilatrice has simply morphed into the global community. Instead of clerical missionaries carrying the Gospel into benighted lands, we have the hordes of NGO volunteers for Development and Human Rights, riding on the foreign aid of the "developed" (mostly White) countries, trying force everyone to become European style liberal democracies.

Both in America and Europe, the Church practically salivates at the thought of mass immigration into its ancestral lands. Once proud of its conviction that it was The One True Faith, it now apes the pathetic White Protestants in trying to show its cultured despisers how cool it is.

But there is an internal contradiction here, I think. The Apostolic Churches, the ancient ones with unbroken roots in the empires contemporary with Rome, all bear distinct cultural and ethnic identities. Along with these identities come forms of worship called rites. In the Latin West, we have the Roman rite (which supplanted the French, Spanish and Celtic rites). In the Orthodox East, we have the Byzantine Rite, fundamentally Greek, but tweaked differently by the Slavs and the Arabs. There are quite a few other rites as well, linked to very specific ethnic groups and their languages: the Assyrians, the Syrians, the Indians, the Copts in Egypt and the Ethiopians, the Armenians and the Maronites. 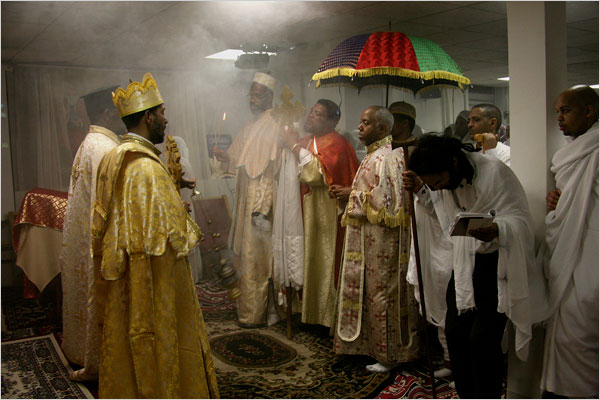 The contemporary Catholic Church is very adamant that all these rites be preserved intact. That is, it holds that particular ethnic groups, along with their languages and history, have a right to the preservation of their rite. Under the rubric of liturgy (!), Catholicism, which is now so trendily allergic to the ethnostate, holds the ethno-rite to be inviolable.

And if people from other rites want to attend, or even formally become member, they have to integrate into it, not change it to suit them. What they are assuming is that these nations, racial and ethnic specificities, must be protected from mongrelization and assimilation. Because without Copts, there is no Coptic rite. No one would expect Africans to be either capable of or interested in maintaining the Armenian rite. So because of the rite, the particular people must be protected as such.

At least for the non-Romans. Largely out of a desire to make amends to the Orthodox and the Orientals and to show a good faith rejection of its former Latinizing imperialism, Rome tries hard to treat these Eastern ethno-rites as if they were priceless museum pieces. Hands off, most of the time. As for its own Roman rite, where it feels no foreign gaze, it is open to all sorts of hanky panky, as the stream of mortifyingly inane rituals in the last 50 years has shown.

My point, though, is that while Rome expects Europe and America to act as if they had no ethno-rights, it privileges other non-Western ethnic groups' rights to maintain their ethnic existence via the protection it lends to their ethno-rites.