Two Americas, in Blue and Red

The phrase "demography is destiny" makes a lot of sense. It's not the only truth, but it's a big one.

Another one, from the doctrines of war, asserts that a smaller group with a strong will to win can often defeat a larger group with less enthusiasm.

In a recent post, in one of my thought experiments, I extrapolated the racial patterns of voting in the 2012 presidential election and created a theoretical racial outline of two countries, Blue America and Red America, as if they were separate.

I hope some time this separation will happen; otherwise I cannot see a way for the sinking and hated (and self-hating) population of EuroAmericans to avoid destruction. Getting to that post-USA setup can only be an awful process for everyone involved, with hugely unforeseeable outcomes...outside of the very high likelihood of unchallenged Chinese global hegemony.


Here they are, together (to enjoy the contrast) 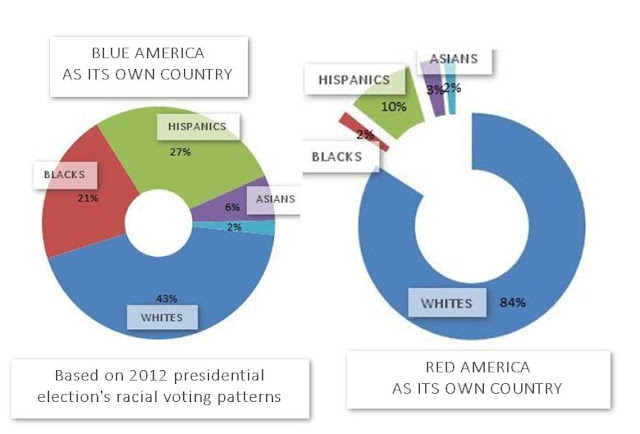 BLUE AMERICA AS ITS OWN COUNTRY
Population: 178 million 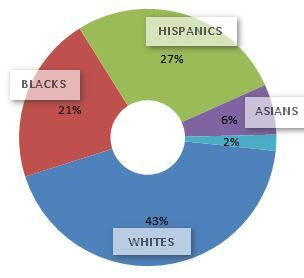 A majority Third World population (57%) and the Founding People reduced to a 43% minority.


Non-Whites are close to 6 out of 10 inhabitants.

Note: I adjusted the 2010 census by adding in 15 million illegal Hispanics (a conservative estimate), since they would clearly gain citizenship in Blue America and I even more conservatively guessed that this would alter the Hispanic voting pattern to 75% Blue.

The Whites would still be the largest minority by far, but given the war doctrine thesis noted above, their will to resist the others would be negligible. After all, what makes a White Democrat a White Democrat but a burning desire to please People of Color?  And the White Democrat birthrate is way below replacement level, so they'd keep shrinking both in numbers, power and status, since abortion and contraception would be "free."

They'd probably still have most of the wealth though. I've included Jews among Whites (70% voted Blue) even though their homeland is in Asia, and they have hugely disproportionate wealth. Asians might be next in line for oppressor status, too, if they don't play their cards right. They also, though small, are very rich as a group. I can't imagine that the Blacks and Browns --who'd have their own hostilities and dysfunctions still flourishing-- would sit still while the Historically Oppressive White Minority hangs on to all that ill-gotten gain...

Oh, by the way. Blue America is pretty much how the current USA is projected to look in three or four decades...


RED AMERICA AS ITS OWN COUNTRY
Population: 140 million 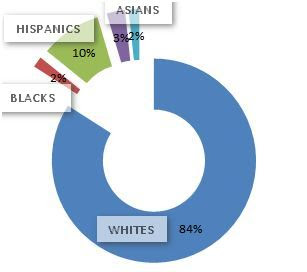 Looks like the 1950's. The hard-hearted clear young thinkers among the Alternative Right reject the idea of trying to go back to the 50's in policy and attitude because, as they say, that's how we got to the mess we are now.

If the demographic majority in theoretical Blue America would not be trapped into repeating their mistakes, it would take a quite astounding recovery of self-confidence and militantly transgressive clarity. And the rest of the world --Blue America especially-- would be very, very unhappy about it.

Cultural confidence, once lost, can be re-gained. History shows this. But it ain't easy, only rarely quick. Or at all guaranteed.

And this, of course, is just ExC playing out ideas in his head and on his pixels.

PS. Did it ever occur to you that the color coding of the two groups is exactly the opposite of what it should be? Red is the color of Communism, the Grande Dame of socialisms. So why are the Left states colored Blue? Well, like mostly everything modern Liberals due, it's to cover over the obvious truth with a bold lie. Like, oh, I don't know, #BlackLivesMatter

It isn't perfect but, it is better than USS-BRA! We here at Ex Cathedra are the true BRA burners! Lazy feminists.

When I first ran across the idea of BRA I thought it was silly because, after all, they're only one out of 8 people. I have since realized that BRA is all too painfully accurate.

As for "isn't perfect", of course no human group or undertaking is. I ain't no utopian. But, yeah, ordinary inescapable human tragedy is far preferable to guaranteed catastrophe.

I ain't no utopian. But, yeah, ordinary inescapable human tragedy is far preferable to guaranteed catastrophe.

Ah yes, I have noticed this and admired it about you. Keen and honest. Even in your damn dreams are you honest. That must be intellectually satisfying on many levels but, it must also be a bit of a downer. Were you a Goth in your youth? You would have been one killer of a poet in their circles and half would have loved you for it, half would have been SJW infiltrators calling you a racist. We knew about Lovecraft before it was cool(especially his racism) a whole bunch of people identifying with a coalescence of Rococo and ancient Teutonic Nihilism are not going to lose their shit over a little bit of racism.

A Goth? Yikes, not even close. A good Catholic boy. I won the Spanish and the Religion prizes in my high school graduating class! I don't think Goths even existed back then, did they? They didn't show up til the 80s.

I was a good liberal until at least the late 90's. I mostly went with the flow. My current points of view are things I could never have imagined me holding. Indeed, I would have been profoundly shocked even to imagine them.