It's common to hear that the supposed primitive purity of Christianity was polluted by its embrace of Greek philosophy. Its "primitive purity" almost always turns out to be a reflection of the idealized self of the critic.


Yesterday was Trinity Sunday. After the fifty days of Easter culminate in Pentecost, a week later there's a kind of theological wrap-up day for Christianity's fundamental doctrine. And its most puzzling. Three divine hypostases in one divine ousia.

As proponents of orthodoxy point out, Christianity made use of the philosophical language of its time in order to play out the implications of its faith. But in the case both of the Trinity and of the Incarnation, they used Greek categories to say things that Greeks would never say. The real power of Greek thought was shown in the positions that were rejected, the heresies of Modalism and Arianism. In those cases, Hellenic rationalism was the winner. 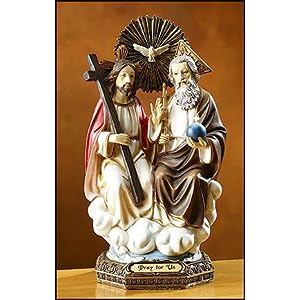 For over 1000 years,
Christians avoided any depiction of God the Father.
Now of course The Old Man With The White Beard is familiar.

Jews and Muslims both think that it's just a disguise for polytheism. But Trinitarian Orthodoxy is the form of Christianity held by 95% of Christians for about two millennia.

PS. I dreamt last night that I had returned to the Dominican Order. I was completely puzzled about how it could have happened and was trying to remember, in the dream, how I got from the couch in my living room in my apartment to the monastery common room where I was sitting and reading, with my capuce pulled up over my head.

I was thinking, How can that guy be this guy? But then there was a commotion down the hall and I entered another room where my oldest friend was complaining because my cousin A had gotten drunk and kissed my friend's ex-wife, who was now his girlfriend...
at 10:41 AM