Papal ceremonies, and liturgical rites in the classical Roman form, now have and have long had a Master of Ceremonies, a sort of on-stage director who makes sure everyone does what they are supposed to do. 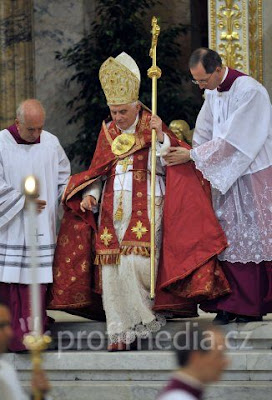 Orthodox ceremonies, far more complex than the Western ones, lack this role entirely, and seem to flow along just fine.

On a tangentially related matter: Penn Gillette is a constant source of fascination and consternation to me. The man insists that religion forces us to hold all claims of legitimate belief as equal. No, obviously not, Mr. Gillette. Any faith that mandates that people be deprived of life, liberty, or the pursuit of happiness except to guarantee those rights to others is clearly illegitimate.

The simple fact that the lack of a creator who has established rules of right and wrong conduct makes assertions of right and wrong difficult is compelling evidence that such a being must exist. I have never heard an atheist give a compelling refutation of that assertion. And may I add, sir, that I have evidence for the existence of a supreme creator: how can men not have been created by a supreme being? :)

His support (dare I say, love) of fundamentalist Christianity (does Catholicism fall under that banner?) is surprising to me. His belief that respect is expressed through disagreement and saying "you're wrong" rather than patronizing "follow your own path to happiness" makes him an odd duck in my book: an atheist I respect.

So, to show my respect for you and your definition of respect, let me say: you're wrong, Mr. Penn. My evidence to counteract your own: the seemingly inexorable march of evolution to Man, the mathematical patterns that manifest themselves again and again in nature, the beauty of the human body and the perfect bliss of the union of human bodies, and millennia of conviction that there is something superior to us that made us and watches and judges our actions tell me that you are wrong. First to the finish line, you fat bastard. :)