December 17th at Vespers begins the cycle of the O antiphons, a different verse sung each night, before and after chanting the Magnificat, for the last seven days of Advent.

The melody for each one is quite similar, begin with the vocative O, and the texts are scripture-based images of Christ under seven different forms: as Wisdom, Lord, Root, Key, Sunrise, King and God. The first letters of each title in Latin, in reverse order, spell out the sentence Ero cras, Tomorrow I will come. And the sequence of images begins in cosmology, moves through the Old Testament and ends with the birth of Christ.

They have been sung in the Latin Advent liturgy since early in the Dark Ages, coming to Rome in the 700's.* The familiar Christmas carol O Come O Come Emmanuel is a 19th century hymnic version.

O Wisdom,
proceeding from the mouth of the Most High,
reaching from beginning to end,
strongly and sweetly ordering all things:
come, and teach us the way of prudence. 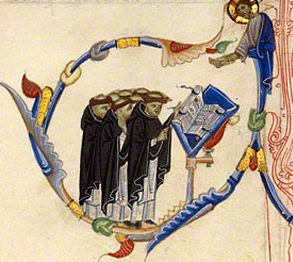 Sung by the Dominican friars of Oxford.

The strange set of vowels at the very end of the page
E u o u a e
directs the closing music of the doxology to the Trinity
which follows every Magnificat:
Gloria Patri et Filio et Spiritui Sancto
sicut erat in principio et nunc et semper
et in saecula
seculorum.
Amen.


*It is commonly asserted that Boethius alludes to them in the 500's, but none of the writers who pass on this notion ever provide a textual location.
at 6:48 PM

Hmm...I wanted to hear the music for the end bit. 'Mong the Methodists, the last part of every service was a loud rousing songlet, sounding something like trumpet reveille, too short to be hymn, with a rather up-and-down leaping melody:

Glory Be to the Father/
And to the Son/
And to the Holy Ghost/
As is was in the beginning/
is now, and ever shall be/
world without end/
Amen, Amen.