Classical Latin is a bit of an effort for me. Although my formal education in the language was entirely in that idiom --Caesar, Cicero, etc-- that was a long time ago. In the interim, it has been Christian Latin of the later years that I am most familiar with.

It is a language whose sound and flow I love.

Unlike English, where word order is important for meaning because the language is so little inflected, Latin words can show up in what feel like whimsical places, their meanings anchored in their numerous inflections. You have to think and hear differently.

My friend Thom, who lives with his family about 50 miles from the recent school massacre, sent me a note with this phrase in it: praeter rerum seriem. "Outside the normal order of things." Part of the music of Catholic Advent and a reference to the virginal conception of Jesus. In darker tones, as he said, it reminded him of those deaths, also praeter rerum seriem. 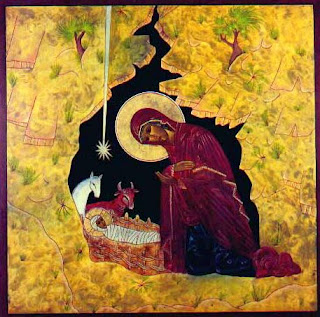 My own Advent musings often hook up with another phrase, which came from the Classics, I think, --Pliny?-- but has been used by the Christians: senescente mundo. "The world, having grown old." Although I can't find a citation, I associate it with Advent as well. An old world coming to its end as a new life, praeter rerum seriem, is about to begin. What is a world, after all? Not the physical planet, but an epochal space, a saeculum, a combination of place and time with a particular shape. Worlds are like cultures, particulars which feel like wholes: the Classical world, the world of childhood, the Muslim world.

Whatever is happening in the rest of the planet, it certainly feels like the end of a world in America, in the West; that the world which that new life began two millennia ago is itself sputtering out, having grown old. But no matter how strong the feeling, I am always a bit aware that I, too, am growing old and that my perceptions might be more a matter of senescente me than senescente mundo.