This image really put me off. Ever since it dawned on me that women "priests" wearing the clothing of actual priests is a form of drag, pictures like this strike me more and more badly. 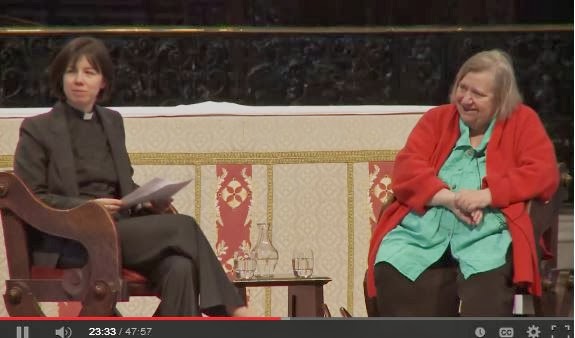 Of course, she's a Church of England cleric and therefore not really a priest in the eyes of those whose claim to Holy Orders is unimpeachable.  But she turned an interview with Clarissa Dickson into an annoying distraction. (And yes, doctor, I do take responsibility for that negative focus as a part of my character and choices.)

She doesn't even have her ankles covered.


Women can wear secular masculinized clothing and although they are thought eccentric or mannish or cheeky,

it is clear that this is a fashion statement, one that only functions by keeping its incongruity alive.


But men cannot wear women's clothing without being held in disdain. If women can wear the distinctive clothing of a male priesthood, doesn't that de-sex the vesture...and the men along with it? After all, the masculinity of clerics in the modern West is not exactly unquestioned anyway.

Consciously or not, feminists' ultimate aim is the destruction of masculinity. Even in the Marines.

Feminism necessarily means the pseudo-masculinization of women and the actual feminization of men. A masculinized woman is a mutant; a feminized man is a shame.

In history, the biggest changes have always been spawned from the most unexpected of events. Who saw Archduke Ferdinand's assassination coming? And who could've foreseen that the retaliation for his murder would result in one of the most disastrous, deadly, and (considering what it was fought over and the results) meaningless wars in history?

Maybe Obama's pet project of putting the Marines in "gender-neutral" clothing will be the straw that breaks the camel's back? Maybe this little folly will finally motivate the military to sit the Prez'dent and the Wretched Hive down and say, "This is how things are going to be."?

"the Prez'dent and the Wretched Hive" :)