Letting the nun out of the bag

Part of the "religion" interest of Ex Cathedra is in how supposedly mainstream Catholic sisters, in North America especially have, in many cases, moved well beyond Catholicism into some kind of ecofeminist social justice spirituality. If you look at their websites, you don't find much Catholic, or even Christian, in the forefront. Small wonder they are dying. Small wonder that the Vatican is investigating them.

I stumbled on to the 2007 keynote address to the national organization that many of them belong to. Remembrance of jargons past. But the most astonishing thing was the honesty with which Laurie Brink, OP recognized the same situation. She points out that many communities of nuns are dying and refuse to face it gracefully. And as part, and only part, of her lengthy speech, this:


"The dynamic option for Religious Life, which I am calling, Sojourning, is much more difficult to discuss, since it involves moving beyond the Church, even beyond Jesus. A sojourning congregation is no longer ecclesiastical. It has grown beyond the bounds of institutional religion. Its search for the Holy may have begun rooted in Jesus as the Christ, but deep reflection, study and prayer have opened it up to the spirit of the Holy in all of creation. Religious titles, institutional limitations, ecclesiastical authorities no longer fit this congregation, which in most respects is Post-Christian."

When religious communities embraced the spirit of renewal in the 1970s, they took seriously that the world was no longer the enemy, that a sense of ecumenism required encountering the holy “other,” and that the God of Jesus might well be the God of Moses and the God of Mohammed. The works of Thomas Merton encouraged an exploration of the nexus between Eastern and Western religious practices. The emergence of the women’s movement with is concomitant critique of religion invited women everywhere to use a hermeneutical lens of suspicion when reading the androcentric Scriptures and the texts of the Tradition. With a new lens, women also began to see the divine within nature, the value and importance of the cosmos, and that the emerging new cosmology encouraged their spirituality and fed their souls.

As one sister described it, “I was rooted in the story of Jesus, and it remains at my core, but I’ve also moved beyond Jesus.” The Jesus narrative is not the only or the most important narrative for these women. They still hold up and reverence the values of the Gospel, but they also recognize that these same values are not solely the property of Christianity. Buddhism, Native American spirituality, Judaism, Islam and others hold similar tenets for right behavior within the community, right relationship with the earth and right relationship with the Divine. With these insights come a shattering or freeing realization—depending on where you stand. Jesus is not the only son of God. Salvation is not limited to Christians. Wisdom is found in the traditions of the Church as well as beyond it.

I can't help quoting the opening of her talk. It tells you most of what you need to know.


Perhaps the title of this year’s LCWR assembly, “The Next Frontier: Religious
Life at the Edge of Tomorrow,” is a bit imperialistic. It conjures up images of
conquered Indians and stalwart white pioneers. The underlying philosophy for “frontier”
is “manifest destiny.” It is our destiny to extend our grasp, to reach beyond what is
currently “ours” and to take from the other. The theological justification in the 1800s was
the salvation of heathen souls—a theology that we no longer hold.
Rather, what would it sound like if instead of “frontier,” we used “margin,” which
Webster defines as “the outside limit and adjoining surface of something.” “The Next
Margin: Religious Life at the Edge of Tomorrow.” I agree. 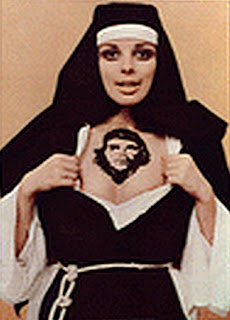 In James Burnham's words: "Liberalism, the ideology of Western suicide. "
at 11:16 AM