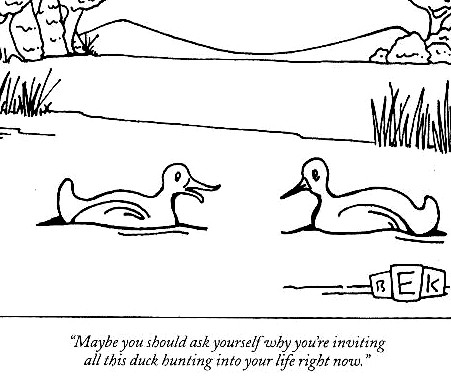 I remember, with some bitterness, the popularity of a New Age maven.... I forget her name now, but it will come back to me....back in the 80's and 90's, especially among men with AIDS. The shock of those years produced, as it always does, desperate searches for some kind of meaning.  The medical narrative was simple enough: you caught a virus and it is going to kill you. If you believed in God, you could wonder if he was punishing you. If you didn't, it was just your bad luck.

Louise Hay. That was her name.
For a number of men, they bought into this woman's idea that they had brought this disease on themselves through lack of self-love and that by learning to love themselves, they could heal themselves. To me, this was not really different from God punishing you, except that you played the role of God, and were unconscious of it. What drew the men was the sense of agency, but the narrative behind it was the same as any angry Baptist's: It's your own damn fault.
Well, there was some truth in that. People got HIV --as they get all kinds of pathogens-- from actions  they chose to perform. Of course, initially, no one knew HIV was there. But once it was, people continued --and continue-- to take big risks or be ignorant.

What I resist is the implication of omnipotence. Although I plead totally guilty to being hemmed in by ignorance and passion as much as the next man, I continue to hold that we can make choices, that we have "free will." Yet, our choices are human choices, always finite and limited. Unlike God who simply said, Let there be light, and there was light...we can't create reality by an idea or a wish. Believe me, if we could...

One of the besetting sins our age, IMHO, is to take small truths and turn them into The Answer.

As an admirer of CG Jung, I find much wisdom in his use of Heraclitus' dictum: Ethos anthropo daimon, Man's character is (his) fate. How much of our lives are the results of our particular ways of perceiving, valuing, emphasizing and excluding, ignoring and obsessing over, interpreting, etc.? Namely, our characters, or our personalities. For most of us, if  you change our situation, we will recreate it. Yet we do not make these things out of whole cloth, or like God, ex nihilo. Responsible we are, but not omnipotent.

Sometimes we are victims of circumstance --sometimes we are its beneficiaries. But we always operate within circumstances. The trick is to discover how, no matter what the circumstances, we operate repetitively. One of the tasks of therapy is to make this discovery, to realize to what extent --and the extent of the extent varies!-- we are the co-authors of our situation.

Unfortunately, since our postlapsarian (or demiurgic, for you Gnostics) condition is not simply a darkened intellect but a weakened will, knowing this does not automatically lead to doing anything about it! That takes work and grace. And character.

It is a particular point of mine to try to take responsibility for my life. By that I mean that I rarely blame anyone for my situation. I may assign them a portion of the responsibility for the situation, but I always try to remember that since I am free, white and well over 21, I have had a huge hand in it as well. It's how I understood my relationships with Thom and with B. The freer we are, the more that is the case. And very often even our unfreedom is partly woven by our own hands.