Been in New York for the last few days and am now at "Sasquatch", which is Mr B's name for the tiny North Fork village where my mom lives. Population 349, of whom 325 are White. This little place is where my siblings and I actually think "home" is, even though it is the place we spent our summers.

For me, it is the other extreme, coast-wise, from San Francisco. Pacific-Atlantic, mountains and surf, lowlying fields and bays; the last edge of America, its first settlements, closest to Europe. 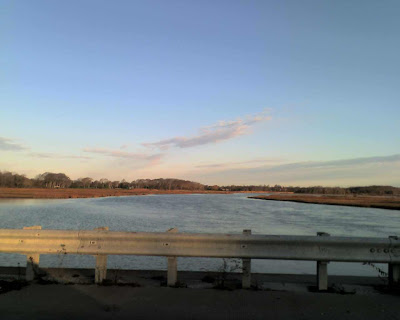 Had a bizarre and alarming dream,which is why I am awake so early. Strange conversations with South African Boer women I do not know, and winding up totally lost --without my iphone!-- in a strange SA city. Woke me up.

Part of the shock of coming home is watching TV news with my mother, an avid Fox fan. Even the hearty right-wingers of Fox seem strangely unreal to me. I give Bill O'Reilley for zeroing in on Black youth crime and the dissolution of the Black family. He will not be thanked for saying that truth. But does Mark Levin actually think that there is a hope in hell for a set of constitutional amendments to save the country?

But the wild salmon I made on the grill last night....mmmm. Mom said it was the best meal she'd had in weeks.

There is a difference between knowing what needs to happen and knowing it will never happen. I think Levin is smart enough to know those amendments are in both categories. But there are plenty of conservatives (myself included, I think) who cannot accept the notion that the country is doomed no matter what they do, and will never be able to live with themselves if they sit by and let it fall. I cannot believe that this country is fated to fall seventy years after it destroyed the empires of fascism and a scant twenty after it bled the Soviet Union to death. I just can't.

On another matter, could you give a little detail about your family's relationship with you? When did you come out, and how? What was their reaction to that and not being Catholic anymore? How long did it take for them to come to terms with that? What is their attitude to you? I'm sorry if I'm prying, but I was curious. My relationship with my own family, and how it will change once my secret is out, has been weighing heavily on my mind for the past week.

Short version. I came out to my siblings first. Since there were six of them, it took some time. They were all fine.

My parental coming out was initially stormy. Mom was theatrically furious. Dad was shocked but reliably un-hysterical.

It took them years to adapt, not surprisingly, and some of those years were kinda frosty. But in the end, I was their son and that was what mattered. One thing it taught me is to give it time and patience and to remember that family relationships can change over time, for better, not only for worse.

Coming out reveals to them someone you know intimately, but to them, it is a stranger in place of their child. They need time to adjust.


My departure from RCism came later.

Yes, I thought hitting them with the double whammy of "Hey Mom and Dad, I'm gay!" and "I'm a fallen away Catholic!" would be unwise. I fully expect things to get rocky. Hopefully by that time I will be on my own and self-sufficient in case things go badly.

This probably won't be happening for a few years, but I wanted your input on what to expect.

Every family is different. But you might be surprised. My dad took it way better than I imagined. It's fraught with anxiety, though, that I know. And a big shock for the parents (even if they suspected, as I discovered my mom did.)

I think my parents suspect. If they do, they seem content to let it stay unconfirmed. I've slipped up multiple times, especially over the past year or so. It's my busybody aunts who think I need to get a girlfriend that I'm worried about exposing me. Fortunately my priest uncle has run interference for me, though I don't think he knows or suspect.

Of my immediate family, my parents will be the most accepting ones, which says something. My nearest sibling is my 17 year old sister, who is right in the middle of that period when anything that doesn't align with your worldview needs to be ignored or burnt with fire.