The icon of decline

If you look closely at this image, you can see pretty well everything that's wrong with Western civilization now. 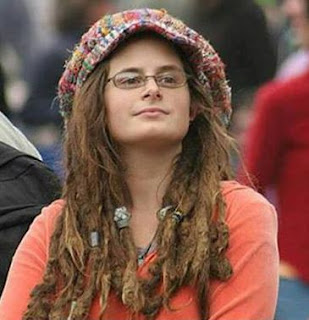 I can't tell if that person is male or female. I want to say female, but I could be completely wrong.

Icon of our decline, indeed.

I'm not sure if you are aware, but apparently Eric Alva, a gay Marine who lost his leg in Iraq, got booed when he spoke in favor of an "anti-bias" bill in San Antonio, saying "without it, I could lose my job," and then chastising those in the audience who opposed it, saying "shame on you" to "those who claim to preach the Word of God"; "God loves me, even as I lay injured on the sands of Iraq." Needless to say, leftists and gays are flocking to give him condolences.

I'm sorry, but when you openly scorn a group of people and question their devotion to God, claim higher favor with the God while living a lifestyle that you know those people think God disapproves of, and support a bill that will likely make things harder on the people you are scorning, you should be prepared for a backlash.

He supported the repeal of DADT, too. And now there has been a massive increase in same-sex sexual assault in the military, and service members who do not support gay marriage (even if they do not harass gay soldiers or those who support gay marriage) are being reprimanded and relieved of their duties.

Where the hell have all the good men gone? How hard is it to find an honorable man-loving man who won't drive me crazy?