My regular commentor Sean raised the issue of masculinity, dominance and inferiority. Reminded me of an incident back in my sacerdotal days. A way in which men and women are fundamentally different.

The group of Dominican friars I lived with had a group of Dominican sisters who lived across the parking lot. We did a lot of work together. And one of the sisters wanted to be a priest. Very badly. She even went so far one day as to say that if the friars had Mass together in our priory without a woman present, the Mass was invalid because half the human race was missing. On other days, she said we should refuse to have Mass altogether until women could be ordained. She was smart and personable in some ways, but clearly, on this issue, nuts.


Anyway, one of the friars was a newly ordained deacon. At the parish Mass the next Sunday, it was his role to read the Gospel and preach. The ceremony is done as follows: at the right moment, the deacon takes the Book of the Gospels from the altar, bows, then carries it with him to stand before the presiding priest, who remains at his chair. He bows before the priest and asks his blessing. Still bowed, with head and shoulders down, he receives it in the Sign of the Cross and thee words: May the Lord be in your heart and on your lips that you may worthily proclaim his Holy Gospel. 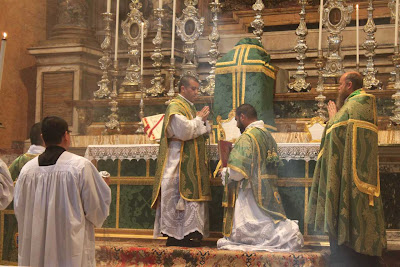 In the ancient rite, he kneels and the priest stands in front of the altar.


The deacon then stands upright, goes to the pulpit and does this. The public reading or chanting of the Gospel at Mass, btw, is strictly reserved to ordained men.

The nun was sitting next to me that day, watching this. She whispered to me, I could never do that bowing. It is so demeaning.

That, lady, is because you are a woman and why you don't understand men. Or the priesthood.

I know, from having been both a deacon and a priest in that ritual, that there is nothing at all demeaning in it. For a man, anyway. On the contrary, it is really about mutual recognition, bonding and respect, about courtly dignity and a shared sense of sacred order. To arrive at a place in the priestly hierarchy where you have an honored role within it, and show your place in it and are recognized by a more powerful member of it as belonging within it...that is far indeed from demeaning. It is an honor for a male. The fundamental task of the male is to find his proper place within the masculine tribe, a tribe which is always hierarchical. The worst fate is not to be on a lower rung, but to be on the outside of it entirely.*

Who is more savagely hierarchical than a group of girlfriends? Guy that I am, I much prefer the former for its honesty.

And while we are on the subject of religion, it seems to pass unnoticed by liberals and by feminists, that Christ's entire mission and centrality is wholly based on his obedient submission to the will of his Father. The Trinity, a deeply masculine image, asserts a root psychological truth: that the Father is First and the Son is Second, that the Son proceeds from the Father, and that both are equally God. A doctrine only a man could have imagined.

(And continuing, if you take the most deeply patriarchal and male-driven religion in the world, what does its name and program, its fundamental form of affiliation, mean?)

What you say makes sense. Recognizing that you are not on the same level as another man and recognizing that you are not a true man at all are different things. As much as I can have feelings of anxiety that I am not as skilled or strong as some of the guys at my gym, this post made me realize that the fact that they are willing to train me and mentor me shows that they accept me and genuinely want to elevate me. The words of praise I hear when I complete a set at a new weight, or lose a couple more pounds, are music to my ears. When I sit down and think about it, my attitude seems to be one of a man to an older brother. It is unsurprising that I did not immediately recognize this attitude and was confused by it, being the eldest child in my family. The superior who is also the equal, the leader who is also a fellow traveler. Yes, that seems to sum up my desire quite well.

Male brotherhood, then, entails what I can only describe as a fusion between the dynamic of the feudal lord and his sworn knight, and the dynamic of the master and his apprentice. The initiate submits to the guidance of the veteran, and over time, men come to recognize when they are outranked in a matter by a fellow. The doctor must not sneer at the carpenter for not knowing the mysteries of the body, for he himself does not know the mysteries of the wood. And the carpenter must not mock the doctor when his hands tremble when they hold a hammer, for his own hands would tremble if they held a scalpel. Be gladly ruled by me in matters of my realm, brother, and I will be gladly ruled by you in matters of your realm.

You said, Ex, that existing outside of the tribe of men is "the base wound of gay men." Do you mean this to mean any male whose eros is directed towards other males, or specifically towards any such man who is a member of the gay community? And do you mean that this is an inherit failing on the part of gay men, or simply a failing placed on them by the Tribe? Whatever the case, it almost certainly means that we start at a disadvantage when we join the Tribe, or lose status in the eyes of our brothers when our eros is revealed. Is this so, or is it sometimes averted?