The Truth about America

The magazine. (And maybe the country, too.)

The rag is the voice of US Jesuits. Been around for ages and reliably liberal. Very well known in Catholic academic, religious and intellectual circles.

They just came out in favor of repealing the 2nd Amendment, for example.

At least they're honest about it.

But the article cited below

describes well-known Catholic author Garry Wills bluntly denying, on the Stephen Colbert Show, the Catholic doctrines of the sacraments (fake and pretend and made up) and the papacy and the whole priesthood (an invented power group).


Rev. Malone, the Jesuit editor, is loathe to call Mr Wills a heretic for his "alternative theological viewpoint", but was offended by his intemperate expression of it, and on TV. "He may dissent from the substance of Catholic teaching, but a baptismal certificate is not excuse for incivility." 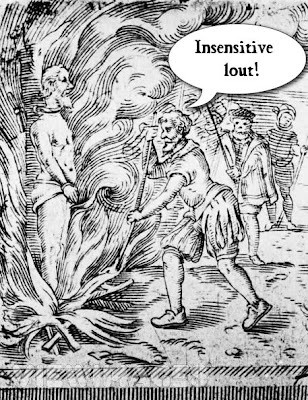 The real problem is not so much that famously Roman --if increasingly liberal-- Catholic Mr Wills bluntly and publicly rejected at least two of the three actual fundamentals of Catholicism (sacraments, hierarchy, plus doctrine), but that he hurt peoples' feelings.