Richard III's bones were just found under a parking lot in Leicester where the GreyFriars church used to stand.

In the high Middle Ages, the 1200s, the orders of friars were founded and had a definite presence in England.  Friars were basically mobile monks with a mission. Rather than being bound for life to a particular monastery and focused on work and prayer behind the cloister walls, as the monks had been since the beginning, friars adapted that life for mobility and for the sake of pastoral work of all kinds. The Brits called them by the colors of their clothes.

The three best known groups were (and are; they still exist) the Greyfriars, the Franciscans. Although nowadays they dress in brown, back then it was evidently grey, with the knotted cord. The Blackfriars, the Dominican preachers, whose black cappa covered their otherwise all-white habit. And the Whitefriars, the Carmelites, who grew out of group of hermits in the Holy Land, whose white cappa covered their otherwise brown habit. 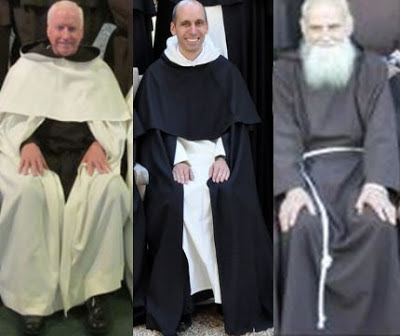 They were large in numbers and very prominent in English church life until the Reformation, when Henry closed down all their houses and pensioned them off. Those few who stood up to him died, usually gruesomely. They did not return to England until the 19th century, when the anti-Catholic laws were repealed.