In disputes over the religious beliefs of the Founding Fathers, this bit of evidence in a letter from the assistant priest at the Anglican church President George Washington attended. In those days, the regular service consisted of bible readings and prayers and psalms, with a sermon. On certain Sundays, there would be added to this the service of Holy Communion. Worship would move from "desk and pulpit" to the altar, but only a minority of the congregation stay for that added solemn rite. 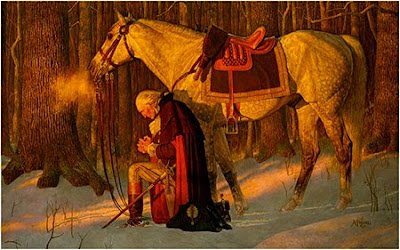 Washington was one of the majority who departed and this became an issue. The General solved it in a manner both ethical and political. The minister wrote of it later:


With respect to the enquiry you make, I can only state the following facts; that as the Pastor of the Episcopal Church...observing that on Sacrament Sundays, Gen'l Washington, immediately after the Desk and Pulpit services, went out with the greater part of the congregation, always leaving Mrs. Washington with the communicants, she invariably being one, I considered it my duty, in a sermon on Public Worship, to state the unhappy tendency of example, particularly of those in elevated stations, who invariably turned their backs upon the celebration of the Lord's Supper. I acknowledge the remark was intended for the President, and, as such, he received it.

A few days after, in conversation with, I believe, a Senator of the U. S., he told me he had dined the day before with the President, who, in the course of conversation at the table, said, that on the preceding Sunday, he had received a very just reproof from the pulpit, for always leaving the church before the administration of the Sacrament; that he honored the preacher for his integrity and candour; that he had never considered the influence of his example; that he would never again give cause for the repetition of the reproof; and that, as he had never been a communicant, were he to become one then, it would be imputed to an ostentatious display of religious zeal arising altogether from his elevated station.

Accordingly, tho' at other times, a constant attendant in the morning, he afterwards never came on the morning of Sacrament Sunday,

But wasn't that before Ivan Karamazov reveal'd unreal presence at the Lord's Supper?

We know from the Valley Forge incident that Washington withdrew from existential danger when praying.