Today in San Francisco we have the Marathon 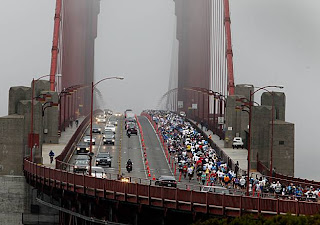 and the Dore Alley Fair. A line from an old post of mine needed some expansion.

Feminism can only occur in societies where the men allow it.


Men in such societies must have achieved a double and very contradictory status. They must have been strong enough to create a stable society, and this always includes a massive outpouring of male energy, (brains, sweat and blood),  including a foundation of force of arms. And yet they must be weak enough to fall for feminism's thinly disguised  hatred of masculinity, marketed as a plea for simple justice

Feminism can only occur in societies where
men's strength, courage and skill have made it possible
and where men's misguided honor allows it to happen to them.

***
Saw a YouTube video of a large man beating a smaller teenage boy who had picked a fight with the man's son. The female newscaster condemned the "violent, macho" behavior. In our world, women assume the right, in public and private, to be the arbiters of what is acceptable male behavior. And no men challenge them on this. Let men try to assume a similar role in regard to women --a role they once had and lost-- and the screaming would begin. Who are you to define us!?


When movements for social change are driven by progressivism, they are zero sum games. Win-lose. Inevitably, if the dominant group concedes anything of substance, it will eventually take the place of the subaltern group. A little over fifty years ago, homos in England could be arrested just for being homos. Now people are arrested there simply for offending them. All in a single lifetime.


Voltaire's line: If you want to know who your rulers are, find out who you cannot criticize.

What will the West be like a lifetime from now?

**
I wasted an hour yesterday doing YouTube comments. Mea maxima culpa. When I replied bluntly but factually to a young Black man's obscenity-laced tirade about Whites, another White man criticized me for using the phrase "you people." (Which I did not, in fact. I wrote the shorthand "ur people".) He completely ignored the savagery of the young savage and wanted only to prove his ethical worth by trying to restrain his very restrained fellow Leukophore. White Lent: The meek members of the resurrection in their alabaster chambers, wearing mind-forged manacles. (Apologies to Dickenson and Blake).

The "you people" game. If a member of a Formerly Dominant Group uses that kind of speech, implying that "you" are not "us" and therefore somehow "other" and excluded, it is big racist and oppressive sin. But if a member of a Newly Dominant Victim Group wants to read you the riot act and distinguish their group from "you" Whites or males or straights, etc. that is perfectly fine.

Had another dream last night related to Covington's Northwest Republic novels. I think the link is that even though I would have no place in that country besides a coffin, he is angry at a lot of the same things that I get angry about.

He ramps up the current regime's multicultural-feminist softish tyranny into a nightmarish extreme, as a justification for the extremism of his own response. But if you take just the British example above, you wonder, if things could get so crazy in just fifty years, what will the next fifty be like? The Liberal sense of righteousness is so profound that they could easily justify all sorts of horrors. Look at what they justify already.

Demographics for Whites are grim, and for White conservatives*, who are no more than half the Caucasian population, even more so. That is Covington's basic point: the threat of biological disappearance. It happened to the AmerIndians, whose numbers (1% of the US population) are so small as to be insignificant. And where they have some moral capital as victims, Whites have zero, as history's oppressors. Where I am pessimistic, he is apocalyptic...but therefore hopeful, because after the apocalypse, the good guys always win.

*Mr. Covington is no conservative. In face, he considers White conservatives to be even more dangerous to his worldview and hopes than Jews. They appear to be on your side, but in the end care only about money, and in any case have proven impotent against the progressive tide. In his view, and the view of the alternative Right or New Right or whatever, just Liberals Lite who will stab in the back any John Derbyshire who tells an inconvenient truth.