David P Goldman as Spengler has been a trenchant commentator about Western decline. 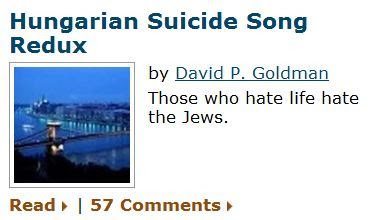 He is not responsible for headlines, but this piece makes a strange connection between Hungarian nationalism, dislike of Jews, and birth-rate decline. The suggestion is that anti-Semitism leads to ethnic disappearance.

For all their contributions to the West, there is a type of Jew whose sense of entitlement, from a combination of theology, history and victimhood, wants to make everything about them, as the lynchpins of the world.

Those who hate life hate the Jews?
A victim identity has lots of short-term benefits in the morally senile West but in the end does nobody good.


There's a witty saying that the Germans will never forgive the Jews for the Holocaust. Constant reminding of past bad blood eventually produces not regret at the deed, but the opposite: regret that the program was not completed.  A woman whose husband cheated on her once in their marriage, who constantly brings this up to him as a way to get him to prove his reform and his love for her will succeed only in getting him to wish he had done it more often or had actually left her for the other woman.

In the US context, Canadian Kathy Shaidle has a refrain: Americans should have picked their own cotton.