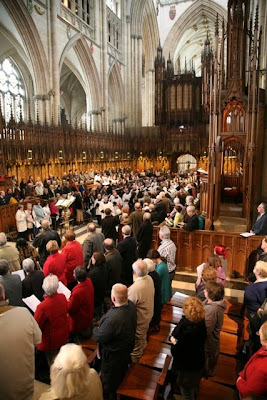 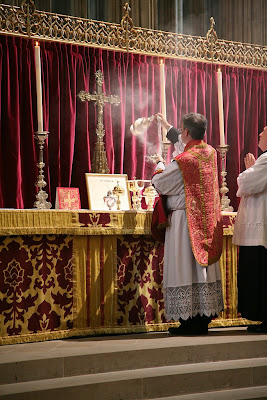 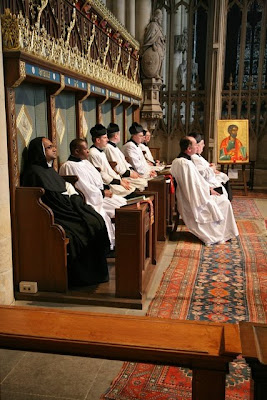 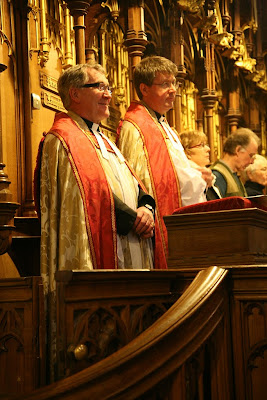 The modern ecumenical movement is a funny thing. Not only have traditional Christian bodies largely stopped fighting with each other and trying to convert each others flock (now called "sheep stealing"), but the urge to make nice seems sometimes to be overwhelming. And of course this hyperfriendly impulse got translated into relations with the non-Christians religion, people we used to call the Jews and the pagans.

Here is a classic example. This is a sung Mass, in the ancient Roman rite in Latin, celebrated by several hundred Catholics in an English cathedral, York. The smiling clerics in the last photo are the deans of the place. Anglican. And what are the Papists celebrating? A woman who was crushed to death with stones under Elizabeth II's law against aiding a Roman priest from...saying this very Mass.
St. Margaret Clitherow. People who would once have been hung, drawn and quartered (the Catholics) or burned at the stake (the Anglicans) by each other now have their pictures taken. The Romish crowd celebrated their heathenish "Mass" on the altar of a great church that the Anglicans, well, stole from them five hundred years ago. Everyone is smiling.

Is it that we have all become better people? More enlightened and loving? Is Jesus finally getting what he asked for?

You know that Ex Cathedra takes a skeptical view of human moral progress.

Whatever else may be going on, one thing that has allowed all this to happen is that, with significant exceptions since the ecumenical glory days of the 60's and 70's, religion doesn't really matter much, except to religious people. The days, in the West, when Christian theological differences made for war --or at least fueled what bellicose behavior would have happened anyway--- are long gone. Religion is just not that important. It has long ceased to be a marker of real power or wealth. That is why this can happen.

Plus, believers don't believe the way they used to. People used to die, and die horribly, for issues which now hardly cause a blink in the eye. Not, I suggest, because of an increase in holiness, but because holiness has become antique. The ecumenical Christians are far more citizens of the postmodern West than they are members of their ancient and feuding bodies. The issue used to be truth. And of course truth was allied to survival and power, wealth and status. (And I do not say these thing with moral disapproval; survival is precisely about power, wealth and status. Ask any people who've lost it to an enemy, or to the passing of time.) Now it's about being nice.

The ecumenical movement in the West is dying. The mainline Protestants long ago stopped caring about the theological differences among them and have become cheerleaders for the social work culture and state. The only Western churches with a chance in hell of ever reuniting, Rome and Canterbury, both know that those dreamy days are over. Canterbury is deconstructing itself with bishops who are female and who are gay. Whatever thin commonality live and let live Anglicans used to have is fast melting.

The eastern Orthodox churches have never been fans of this carrying on. The leaders make the minimum gestures, but the folks at home and the priests and monks on the ground are not interested.
These are people with long historical memories and for most, long centuries of survival in the dhimmi world of an imperialist and colonial Islam. They broke with Rome a thousand years ago, and doctrinal purity, traditionalism, serves them as well as a Pope could. No thanks.

Evangelicals and Pentecostals, the essence of whose faith is emotional enthusiasm and a fierce devotion to the Bible, have also sat this one out. They actually think their faith is true.

Then there is the world of religion outside. Judaism. A unique story. And of course, Islam. Deny it in public all they like, but here the situation is as it was in the 16th century. The connection between truth and power, survival with wealth, power and status, is alive. Very much so. The urge to make nice on the Christian side is still unfortunately strong. When the Pope obliquely told the truth in his lecture on faith and logos, tons of Christians joined with their future Musselman overlords in condeming his "insensitivity". And the very quick turn to violence which he noted was played out by some Mohammadans precisely in outrage of his describing the very thing they were doing. How that 1400 year old war will turn out remains to be seen.

But I don't expect to one day see the Patriarch of Constantinople celebrating the Divine Liturgy in Haghia Sophia.
at 9:10 AM