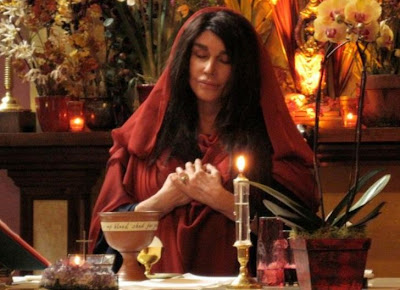 Referencing Gnosticism in my previous post put me in mind of my friend Rosamonde Miller, Bishop of the Ecclesia Gnostica Mysteriorum in the South Bay.

She is an extraordinary woman, a combination of deep spirituality and eyes-wide-open on-the-ground common sense and humor. Of French and Cuban cultures, with an unusual biography, in another life she would have either been a Carmelite abbess or been burnt at the stake.

Mary Magdalen is a powerful figure in Gnostic mythology. Although Dan Brown's pro-Gnostic novel, The DaVinci Code, purports to restore Mary Magdalen to her rightful place, she shared my dismissal of its bric a brac historiography. As she said, "I'm Gnostic, not stupid." If women show up full of revisionist anger that "the patriarchy" painted the Magdalen as a prostitute, she calls them on their condescending moralism about sex workers. She has disappointed more than one zealot.

When we get together, the topics almost always include politics, sex and religion. And food and drink. She is a connoisseur of single-malt whisky. "Her Grace" is someone with whom you can clearly disagree without it becoming personal. As she herself confesses, she is a not only a Gnostic but a heretic among Gnostics. Practicing what she calls "wild Gnosis", --focused on experience rather than explanation--she loves the traditional myths but refuses to embrace world-rejecting dualism. Quite a trick. But hey, this is California and Gnosticism is nothing if not idiosyncratic. For her bob-and-weave approach to the divine realm, I once called her "a theological martial artist", which she quite liked. With the strong presence of the Divine Feminine in her sanctuary, it is important to note that it is not anti-male at all. On the contrary. She claims a priesthood lineage that was all-female and enjoys pointing out that she is the first of her line to ordain both sexes. Rosamonde is a woman who actually likes men.

When I have gone down to the sanctuary for the liturgy, I have usually found it a religious experience. The service is (in my opinion) a second-cousin once removed of the Roman Mass*, with a Gnostic myth of Logos and Sophia replacing the orthodox narrative. The language is formal, sacral and poetic, composed both of her own prayers and elements of ancient Gnostic scriptures.

I have been apart and I have lost my way.
The archons have taken my vision.
At times I am filled with Thee,
but often I am blind to Thy Presence,
when all I see is this world of form.
My ignorance and blindness are all I have to offer,
But these I give to Thee, holding back nothing.
And in my hours of darkness,
when I am not even sure there is a Thou,
hearing my call, I still call to Thee with all my heart.

Two things about this Eucharist are notable. First, she does her "talk" before the rite starts. When she is finished, she completes vesting and then begins the formal ceremonies.There are no separate scripture readings and no more preaching or commenting.  Second, the ritual and music hardly varies at all from week to week, either in word or gesture, yet her performance of it is never rote; she is present to what she is doing. Both these things combine to let you sink into flow of the rite as she does and be carried along with it as you do it, not having to pay attention to her ego or worrying about finding your place in a complex hymnal or prayerbook. After a while, you can recite and sing it mostly by heart. The music, to be frank, is not all to my relish, but the whole experience is refreshing to the soul.

She calls her church "a sanctuary for travelers", which it certainly has been in my history. With her quietly charismatic personality, she is often on the receiving end of all sorts of projections and desires. She could have easily turned her admirers and "followers" into a cult, but I have never seen her show the slightest desire for that. When we first met, she told me that I would be welcome to participate but that I could not join the church because it had no members. People, even the priests she ordains after a long and individual initiation, are free to come and go as they will. "I have children of my own; I don't need to be anyone else's mother." If you are at all grown up, it is easier to become her friend than her disciple. And I think she prefers it that way.


*I say this because her own liturgy appears to be inspired partly by the Mass of the Ecclesia Gnostica of Los Angeles, whence a part of her ordination lineage arises, and that ritual mirrors a Roman Rite Low Mass in vesture and gesture, but with a drastically different text.

What a wonderful description of a unique and wonderful teacher. There are few that have her depth, and fewer her understanding of Gnosis.