The Osama bin Laden author got me thinking about Sherman's march, a famous or infamous episode in the Civil War. And how, if you are going into war, you go in to win. Or don't go.* 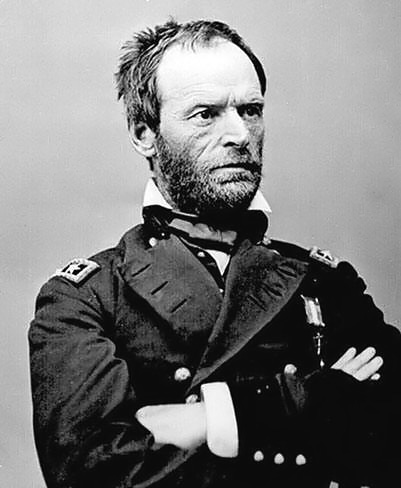 He didn't fool around and his ruthlessness helped end the war sooner. Makes me think of the complexities and the self-hobbling of our recent military efforts. The rules of engagement in Afghanistan.

But what you don't hear about and what is astonishingly hard to find info about is the answer to this question: As he was burning his way through Georgia, how many civilians did his troops kil**? A few lines below from the Georgia Encyclopedia.


Physical attacks on white civilians were few, although it is not known how slave women fared at the hands of the invaders. Often male slaves posted guards outside the cabins of their women.

Military death totalled 3100, of which two/thirds were Yankee troops. I am not minimizing the effect of a scorched earth policy on non-combatants, but it strikes me as very notable that neither as policy nor as side-effect were Southern civilians attacked. Not only was this part of his troops' marching orders, but they actually carried them out. This was 1864 and by that time Northern blood had flowed in rivers, so there was plenty of reason for an indiscriminately vengeful strategy of rape and murder. That's not what happened. That's pretty amazing.

*Someone asked me if I were younger or if I were asked by a young man about going into the military, what my answer would be. To his surprise, I said I would not join and would advise against it. Why? Because I have no trust that the American people would stand behind you, growing tired of the war before it could be won. I believe it is true that we lost Vietnam at home, not on the battlefield. I helped. And I cannot believe that that constant high-volume anti-Iraq voices here during Bush's administration --and it was really a way of hating Bush more than anything to do with Iraq-- had no effect on our men there.

**I lapsed into the Eddy Murphy skool of orthography here.
at 10:37 AM