My hard drive is being de-fragged and optimized. Wish there were an app to do that for the rest of my life.

Nothing I have read in the news this morning indicates that I am wrong about the de facto civil war between the Two Americas.

The White House is making nice with the Muslim Brotherhood and gangs of feral Black youfs continue their intifada while a (White) Texas teenager is in jail and is facing serious prison time for "making terroristic threats" during an on-line video game.

The real GOP:
The Elephant in the Room
is a White Elephant

If the ideological and racial differences were geographically concentrated, we'd have a full-swing secession movement going on. As it is, with few exceptions, we are grossly enmeshed with one another. Even VDH now sees us as Rome in AD 200. I think he's being optimistic. Odoacer is already on the throne. 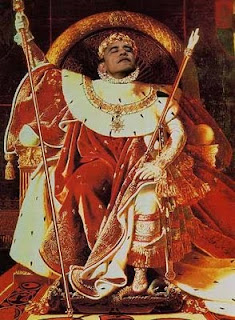 With all due humility, I still find my thought experiment about A Day Without A Caucasian the most enlightening perspective on our current mess. It's not the whole story, --it does not cover the awful damage done by feminism--but it's the basic story.

Even ethnically homogeneous societies develop internal fissures; that's the way of things and unavoidable. But the ghastly "multicultural" model now dissolving the West is a setup for failure and disaster, especially when it is ruled by the delusions of egalitarianism and endless whining about "racism."  Both common sense and history tell you that forcing people to live together whose ways of being and thinking and doing are so alien to one another is a crime. Why the hell do you have separate countries in the first place?

When in Rome, do as the Romans do used to be common policy. Now it's When In Rome, Turn It Into Mexico. (The very place, btw, that was so effed up that you had to leave it.)

Listening to Antonin Scalia the other day, he offered a background to the Bill of Rights amended to the original constitution. Because I am so used to them, I did not see that they do in fact seem to be a hodgepodge of items without any internal coherence. His point: they list the issues that a tyrant was likely to press and they set up protections against his tyranny. But, as the Gnostic scriptures say, Against human folly Heaven itself has no defense.

There is a quote that liberals like, from Sinclair Lewis, that "when fascism comes to America, it will be wrapped in the flag and carrying a cross." He was utterly wrong.

Your comparison of Obama to Odoacer may have merit, but if this is the Fall of America, it is a slow or unnoticed fall. It reminds me of a quote from a video game, of all places, spoken by the main character's mentor-turned-nemesis. "It is such a quiet thing, to fall. But far more terrible is to admit it."

Perhaps the only thing keeping the country going is the belief that we are still America. Once we decide or realize that we are no longer the United States, all bets are off. It would be interesting to see what countries eventually emerged from the rubble, what nations traced their national and cultural heritages back to the U.S.A., like the European nations that rose from the territories of Rome after it fell.