Gay Marriage in the Castro

Several blocks of crowds are already assembled to celebrate the SCOTUS decision. I can hear the band playing. Helicopters overhead. Obligatory drag queen in blond wig and red dress. 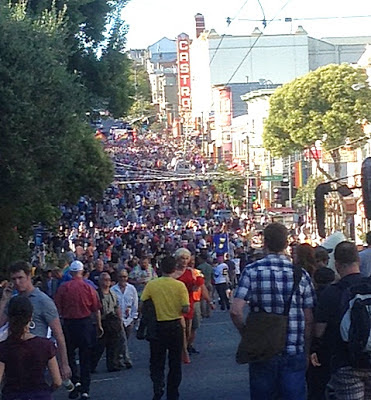 I have friends who will be made very happy by this. My own POV is much more Ex Cathedra-ish.

To me, yet one more example of society dismantling itself to placate a Victim Minority.
at 6:30 PM

You can come to my house if you want.

Is it bad that I don't care anymore?

Don't get me wrong. I still do, seeing as how now straight people who truly had no beef with gay people with see them as bullies and oppressors thanks to the fact that the Supreme Court, in all its awesome wisdom, has decided that there is absolutely no reason to oppose gay marriage and/or support the at least 4,000 year old conception of the institution except that the great specter of... bigotry! (Cue Psycho chords)

The SCOTUS has nominally left this for the states to decide individually, and while the allegation of bigotry is not entirely incorrect, it opens the door for couples and groups to challenge every state that has banned gay marriage in a slow and painful war of attrition. I do agree with the principle behind the DOMA decision. Even my very Catholic mother admitted she thought it would be discriminatory if the federal government did not give benefits for same-sex couples married in states that recognized gay marriage.

But honestly, I'm just tired of fighting for a lost cause. The right lost this fight when its luminaries started having affairs, and getting divorced, and using birth control, and then like zombies saying, "Marriage is a sacred bond between a man and a woman." The left and the LGBT community called them on their bullshit, and that's that. But this doesn't mean that I like the gay community anymore than before. They should all recall what Nietzsche said about fighting monsters.

Screw it. Since it is the only political statement that I can still make on the issue, I shall not describe myself as "gay." I am an androphile, a lover of unapologetic masculinity for all to see. I think I'm still free to call myself whatever I want, at least for now.

I have to confess that I felt a small amount of purely selfish joy and hope today, beneath the resignation and frustration. Maybe one day I will go with the man I choose to spend my life with to the local court house, and with no fanfare, quietly request on of these licenses. I still refuge to call it a marriage. Too much history, too many connotations, not enough imagination or male creativity. Maybe I'll ask that they make a "blood brotherhood" or "twainage" license, with the same rights and all attached, but just a different word. I came up with that second one from the Old English masculine word for "two." As much meaning in those two syllables as "marriage." And yet, to my eyes and ears, better.

But since I am feeling cynical today, I think I shall conclude by borrowing a quote from Game of Thrones' Lord Varys to describe my current opinion on the world and my place in it: "The storms come and go. The big fish eat the little fish, and I just keep on paddling."