The local parish church in the Castro, Most Holy Redeemer, is for grays and gays, lots of homosexuals and the remaining local old folks* celebrating "God's inclusive love". A rave review on Yelp enthused:


Finally! After a year and a half of (admittedly half-hearted) combing through the city to find catholic services that touch my soul, I found it at Most Holy Redeemer Church this past Sunday.

The music inspired me, with two notable solos, one by a heavily tattooed man who sang Leonard Cohen's "Hallelujah**." The whole congregation joins the choir  with gusto, and the result is uplifting. 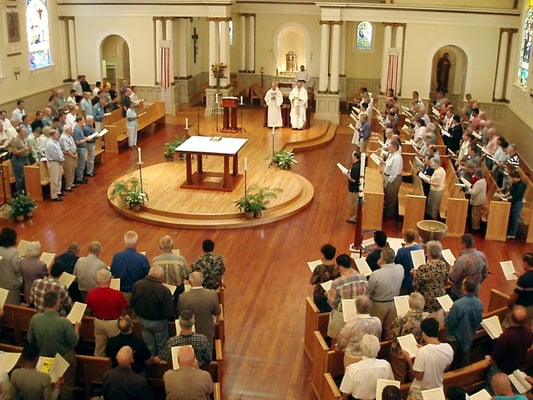 Amazingly, a succession of local bishops (including one who is now cardinal and Papa Ratzinger's successor as head of the Holy Office) have mostly let the place be. But once in a while the boyz overstep the line and get smacked. And then whine, as if shocked and surprised. But it seems to have the quality of a well-practiced dance.

They used to have the Sisters of Perpetual Indulgence, a thoroughly and offensively anti-Christian group of cross-dressing adolescent drama queens, run a bingo game in their basement. One of them even got the surprised bishop to give him/her communion. Then that was over. And they recently invited three prominent Protestant gay clergy to speak at their Advent Vespers series. The bishop said no. Big surprise. One of them felt "disrespected."

I suppose that it is really a judgment of prudence, but one that seems stunningly obvious to me, that the Catholic Church cannot and therefore will not say OK to same-sexuality. As I have said before, if you make that kind of exception to the Natural Law Sexual Axiom, then the whole edifice of its sexual ethics comes tumbling down. How likely is that? Especially given the repercussions in relations with the Eastern Christian world --which Western liberals don't even think about but which Rome thinks about a lot-- and its effect in the Third World, where those patriarchal cultures have no sympathy for fagginess, and on mission work in competition with Muslims, who could then proclaim that the Catholics are in favor of ass-fucking. Both on the level of theological theory and ecclesiastical survival, "Gay is OK" is a non-starter.

The Catholics are also not gonna ordain females to the priesthood. Or have the Pope elected by lay people. Or open up the Latin rite priesthood to married guys. The groovy days of "the spirit of the Council" are gone. At least in the real world.

Aside from their, to me, pointless posturing about this dead-end issue, they do a lot of good things, practical things. And the ringing of the bells is a nice traditional sound. I have not been inside the place for many years, although when I was waiting for my liturgist friend B from Canada after services several weeks ago, you could hear the music on the street and it sounded very good. They are that Catholic rarity, a congregation who actually sings. Maybe they think of the music of the Mass as a set of show tunes.

*I was tempted to make a crack about it being a congregation of old women of all ages and genders, but since this is Christmas, I paraleptically forbore.

**I received an Italian Christmas e-card with the chorus from this song as its background. As the culturally-alert sender noted, the lyrics seem otherwise distinctly unXmasish.


Maybe there’s a God above
But all I’ve ever learned from love
Was how to shoot at someone who outdrew you
It’s not a cry you can hear at night
It’s not somebody who has seen the light
It’s a cold and it’s a broken Hallelujah
at 11:24 AM

Or open up the Latin rite priesthood to married guys.

This happened nearly four years ago.

You know, I thought some smarty-pants would point this out, but I already had too many asterisks and I am trying to curb my affection for parentheticals.

First, for Anglicans migrating to Rome, it happened longer ago than four years. On an individual basis it was going on since the 50's, Paul VI okayed that in his 1967 Sacerdotalis Caelibatus, and it was part of JPII's Pastoral Provision for the US. So there were rare exceptions.

And the new Anglican ordinariate allows currently married ministers to become priests on a case by case basis but requires any future seminarians for that ordinariate to be celibate. Once widowed, they will not be allowed to marry again. And no married priest may become a bishop.

This hardly constitutes "opening up".