If Mormons (the Church of Latter Day Saints) are to be considered Christians despite their major departures from historic Christianity, what about the Moonies (The Holy Spirit Association for the Unification of World Christianity)?

Apart from their different 19th and 20th century foundings, Mormons and Moonies do have striking similarities. Both religions' founders, Joseph Smith and Sun Myung-Moon, claimed special revelations which called them to complete Christ's derailed/unfinished work by (re-)founding the Church, both penned a post-Biblical scriptural corpus (Smith's Book of Mormon, Doctrines and Covenants, Pearl of Great Price and Moon's Divine Principle), and both center their morphings of Christianity around marriage as the condition for salvation*. Both reject the Trinity: Smith's physical Heavenly Father, who was once just a man himself and grew into Godhood,  joins an (unnamed) Heavenly Mother to produce the spirit children who eventually become incarnate in human bodies, while Moon asserts that the incorporeal Father joins with the female Holy Spirit to jointly parent the souls of the redeemed human race. Both groups avoid using the Cross in their religious imagery.

Even the ultraliberal National Council of Churches declared the Moonies non-Christians.

If by both historical standards and by contemporary count, 95% of Christian churches have taken the Incarnation of Christ as Divine/Human Son of God, plus the recognition of the sole Deity as a communion of Three --Father, Son, Spirit--- as fundamentals, once you break those central and linked beliefs, how do you maintain that your religion is still Christian rather than post-Christian?


Once your roots in the previous faith matrix are transcended sufficiently, you get a new religion. Which is why Christians aren't Jews. And Mormons and Moonies aren't Christians.

*Another somewhat similar post-Christian church is the New Church of Emmanuel Swedenborg, who influenced William Blake and Carl Jung. Once again, a seer of special revelations far outside the historic Church, a large quasi-scriptural corpus and a special interest in marriage as the vehicle of salvation. 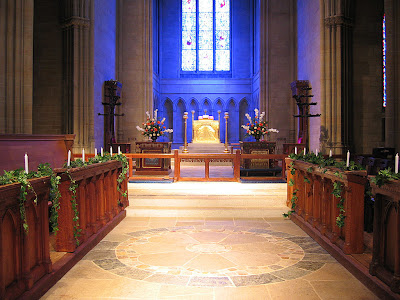 And then there's the once very visible but now dwindling Christian Science Church. Again, post-Christian. No Trinity, no Incarnation. A post-Biblical text from a New Thought founder(ess) who resurrects the lost doctrine and reality of a spiritual Christ. Here, marriage, while honored, plays no central role in the mythology, which is entirely focused on mind-based healing.

Swedenborgianism was also the religion of Helen Keller; this isn't mentioned when people gush over her socialism. Apparently her ridiculous economics are better than her ludicrous (even for religion) theology.