Christmas, especially as I grow older, is made inevitably of memories. 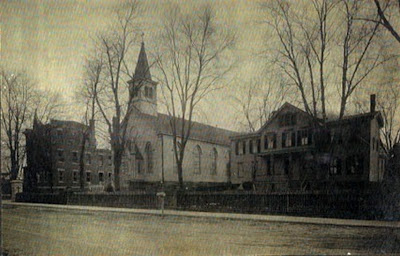 Although this shot is from 1910 or so, when my family moved to this parish, St Boniface, Elmont, after the War, it looked exactly the same: convent, church, rectory. 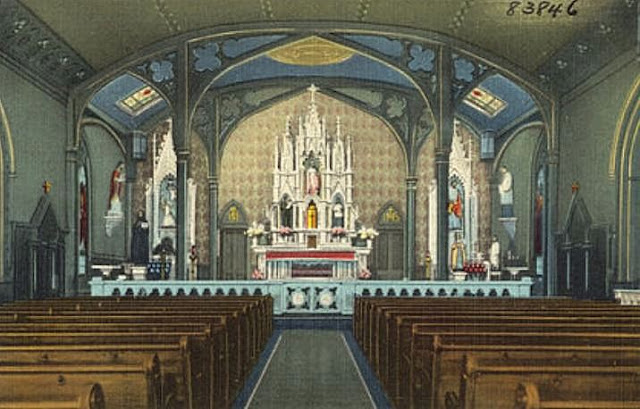 And this image of the sanctuary, also from early last century, is very much as I remember it. The carved Gothic altar and reredos rising up like some divine castle. All the painted statues: the Sacred Heart, the Virgin Mother, St. Aloysius Gonzaga, St. Marie Cabrini, the Infant of Prague, St Joseph, St Anthony of Padua...and later, a large smooth Pieta right by the communion rail. Increasing wealth, by my time, had paid for a ceiling mural: bishop St Boniface, with an ax in his hand, standing on the felled sacred oak of the Norse god Thor. Like so many things from childhood, it seemed far larger and more grand than it now appears to have been.

I was an altar boy here and learned the old Latin Mass, choreography, music and responses. I was in the fourth grade, probably 8 or 9. Suscipiat Dominus sacrificium de manibus tuis...and the complex case ending changes in the Confiteor: ...beatae Marie semper Virgini, beato Michaeli archangelo, beato Ioanni Baptistae, sanctis Apostolis Petro et Paulo, then with a change of verb, beatam Mariam semper Virginem, beatum Michaelem archangelum, beatum Ioannem Baptistam, sanctos Apostolos Petrum et Paulum...I remember the smell of the sweet red wine and the incense and the beeswax of the candles, the creak of the priest's shoes on the altar steps, the muttered sacred words, the complex gestures of hand and head...Masses read low and sung solemn high, funerals, weddings, Benediction.

In the old Mass, the priest usually consecrated just one host, the large one that he would consume. For the communion of the faithful, he would open the tabernacle. That was something, if you were up close. It was covered with an embroidered silk veil, like the Holy of  Holies in the Jerusalem Temple, and with carved bronze double doors with a key, and when it opened, there was a second veil, all white, and the insides were bright burnished bronze. There were kept the ciboria, the "vessels for food", plated with gold and holding the impossibly light and white communion wafers, already consecrated. When I was a kid, I used to think that they were created ex nihilo by God inside the tabernacle like manna and that the priest would reach in to retrieve them for us. It was a magical world. And it was absolutely real to me.

It was in that church one muggy Sunday that, because of an overflow crowd, I had to sit upstairs in the choir loft and found myself in the midst of them singing Mozart's Ave Verum.  I thought my heart would leap out of my body. I never forgot that feeling. PS.  The old church was torn down and replaced with round brick structure that looks like a space ship. My old neighborhood is mostly Black now, and the parish is dominated by Latinos and Haitians. And a half mile down the street, alas, a mosque.
at 9:22 AM