I used to be a Star Trek fan. Not enough to be a Trekkie and go to conventions, but enough to watch the series pretty often.

What put me in mind of this was a documentary I watched in the couple of wee hours last night when my jet lag kicked in and I awoke in mid-sleep. Shatner --now 80!--produced The Captains, interviewing all the others. It is almost always perilous to get to know the actor who plays characters you like. This was no exception. Shatner's strange interviewing style, a combination of Barbara Walters and Mike Wallace, made for an odd viewing experience.

I enjoyed the original series for its originality and campiness, and until the combined moralism and unreality* in Roddenberry's project became obvious to me, I watched The Next Generation often; with the exception of the always irritating Number 1 Jonathan Frakes, Stewart (a fine actor) and his crew were interesting and engaging and the plots at their most imaginative, even if the moral of the story was hamfisted and obvious.

Mannish Janeway's claustrophobic series was sunk for me by the rest of her crew; except for Chicote, they were mostly brittle, all unlikeable. I would have happily drowned Neelix and Kess.

Even less appealing was Sisko's DS9 series. The man should stick to pompous voiceovers. (After interviewing him, even Shatner described him as kind of woo-woo out there in jazzland).

The only really appealing and watchable male captains for me were Bakula,

a longtime favorite of mine ( especially as Harry D'Amour --what a great name-- in Clive Barker's Lord of Illusions). He had great buddy chemistry with his chief engineer...which produced a lot of slash fiction. 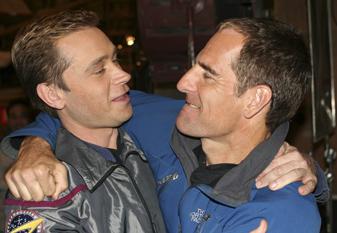 and in the newest 2009 movie, young Pine, a very very...very... handsome if lightweight fella.

But in person, neither of them became more attractive. Captains Archer and Kirk are Starfleet captains, after all.

Scott and Chris just be actors.

*It may seem odd to critique a fantasy series for unreality, but if you are going to make massive moral statements and posture all over the galaxy based on a fictional society where the intractable problems of real life --poverty and war-- have all been solved in the twinkling of an eye, it really cuts down on your Terran street cred.
at 2:33 PM