More Catholic than the Pope? 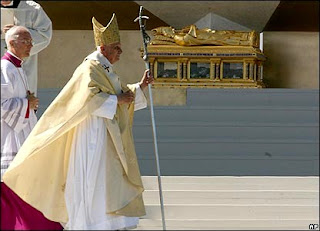 People who know my history often opine to me about the current occupant of the Chair of Saint Peter, the guy who, if he wanted to, really could blog ex cathedra.

They are all distressed that Pope Benedict sounds so...Catholic.

The gay fellas I know can't seem to understand why he won't come out -- ;-) -- and say that it's ok to be gay. I sympathize, of course. That dissonance changed my life.

The whole structure, edifice and heart of Catholic sexual morality is based on this axiom: the only valid place for the most intimate sexual activity is between a married man and woman, and where it is open to the act of procreation. Outside that, it is sinful.

Now, if you make an exception to this, the whole thing starts to unravel, and the largest Christian church in the world suddenly has no sexual morality. Next thing you know, you'd have the Anglican Communion, then the Episcopal Church. And you know that my take on them is that they are just turning into Unitarians in drag.

So, expect that at the head of the Roman Catholic Church you will continue to find a...Roman Catholic.
at 8:00 AM