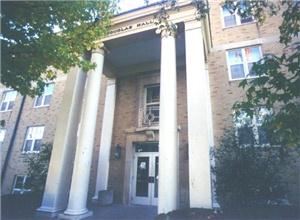 The faculty senate at Eastern Illinois University is considering removing the name of Stephen Douglas, he of the famous Lincoln-Douglas debates, from one of their buildings. Douglas held unacceptable views on Blacks.

The author of the article that discusses this issue writes


It is easy to read (the) charge that Douglas "bears a dishonorable record of public service and is hence undeserving of public acclaim and honor" as simply another sanctimonious exercise in air-brushing the racially-insensitive and diversity-intolerant out of college and university histories. And this has provoked some equally-predictable push-back from historians like EIU's Mark Summers, who argues that "trying to find historical actors who fully abided my own moral judgments was a fruitless exercise... because our world today is too different from the world occupied by predecessors who spoke and acted in the past." Douglas was, in other words, a man of his time, when white supremacist attitudes were actually mainstream, and should not be judged by "presentist" attitudes.

However, the author then finds his own grounds for removing Douglas' name, based on another political stance he took. That's a mistake. He got it right earlier on, describing the move "as simply another sanctimonious exercise in air-brushing the racially-insensitive and diversity-intolerant out of college and university histories." And out of American history.

Perhaps the doctored puritans of EIU have never read Great Emancipator Abraham Lincoln's real views on Blacks? He rejected slavery, but never felt that Blacks and Whites were or could be equal (“there is a physical difference between the white and black races that will for ever forbid the two races from living together on terms of social and political equality.”), hoping that most of the African-descended would return to Africa. Let's take down the Lincoln Memorial.

Part of the progressive agenda, with PC as its metastasizing modality, is to disconnect contemporary Americans, especially whites, from a positive emotional connection to their past. To destroy their self-respect and cultural pride. And they have succeeded all too well. The ridiculous social pressure to use only "correct" terms for Official Victim Groups is a way of saying that all your thoughts and all your language...and your whole culture and history...prior to The Sixties was wrong.

We now have to make believe that the tribal peoples who lived on the North American continent prior to the European invasion and conquest are "Native Americans." They were not. The Americans conquered them and absorbed or corralled them. "America" is an entirely European creation. To use the PC term implies that the Indians are the real Americans and we Johnny Come Latelies are mere evil usurpers; that's the PC narrative.

As well, there is not one derogatory thing about calling Japanese, Koreans or Chinese "Orientals." But it has taken on the shame of "nigger", so that now one must say "Asians". Why? Despite the surface blather about Eurocentrism, it is also to cut us off from our shameful and ignorant past. All language prior to the Sixties must be expunged, so we can learn to think in the new and enlightened way. But any people that cuts itself off from its past is committing suicide. And that, of course, is what the progressive and liberal agenda is about.

An incident came to mind. When I was the new Executive Director of the Toronto AIDS organization, I was talking with the Board about various groups we were working with, including "the deaf community". A Board member who would later and disastrously become its Chair (and my boss), shot out, "Not deaf, hearing-impaired."

This man was a first-class pompous asshole. And he was doing the very PC thing of self-satisfiedly correcting my language in public, from his high PC horse. But as a matter of fact, he got it, natural for him, horse's-ass-backwards. It's the notion of "impairment" that deaf activists rejected and so they embraced "deaf" as their title. I had to listen to a lot of crap about "Deaf Culture" for years.

But, yeah, he epitomizes the whole shabby game.

"We now have to make believe that the tribal peoples who lived on the North American continent prior to the European invasion and conquest are 'Native Americans.' "

It is veddy interestink to me what terms said Native Americans themselves prefer:

"The terms used to refer to Native Americans are controversial; according to a 1995 US Census Bureau set of home interviews, most of the respondents with an expressed preference refer to themselves as American Indians or Indians."

..."Indians" being the very term our PC overlords most want us to discard. Sometimes on the rationale that we mustn't cause confusion between them and the other Indians. Who know their country is Bharat.