The Trappist monk Thomas Merton was someone I used to read a lot of when I was younger.  He combined a down to earth eye  and a monastic romanticism with a mystical streak and a gift for thinking and writing. Voluminously. I was just in the SF Main Library today and re-read his essay, Firewatch, a rambling meditation on his turn one furnace of a summer night as lone night watchman in the great monastery of Gethsemani. It ends his 1953 The Sign of Jonas and contained lines that once greatly comforted me:


"The Voice of God is heard in Paradise: 'What was vile has become precious. What is now precious was never vile. I have always known the vile as precious: for what is vile I know not at all. '"

I love this poem below mostly for the section So the bells rang. It expressed very much my own many years' experience of chanting the Office in choir, something I used to love. St Malachy's day was yesterday. 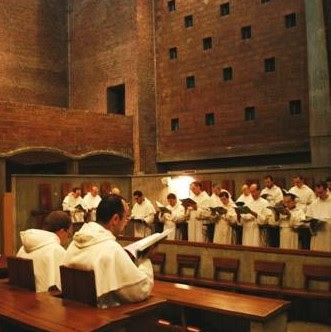 In November, in the days to remember the dead
When air smells cold as earth
St. Malachy, who is very old, gets up,
Parts the thin curtains of trees and dawns upon our land.

His coat is filled with drops of rain, and he is bearded
With all the seas of Poseidon.
(Is it a crozier, or a trident in his hand?)
He weeps against the gothic window, and the empty cloister
Mourns like an ocean shell.

Two bells in the steeple
Talk faintly to the old stranger
And the tower considers his waters.
"I have been sent to see my festival," (his cavern speaks!)
"For I am the saint of the day.
Shall I shake the drops from my locks and stand in your transept,
Or, leaving you, rest in the silence of my history?"

So the bells rang and we opened the antiphoners
And the wrens and the larks flew up out of the pages.
Our thoughts became lambs. Our hearts swam like seas.
One monk believed that we should sing to him
Some stone-age hymn
Or something in the giant language.
So we played to him in the plainsong of the giant Gregory:
Oceans of Scripture sang upon bony Eire.

Then the last salvage of flowers
(Fostered under glass after the gardens foundered)
Held up their little lamps on Malachy's altar
To peer into his wooden eyes before the Mass began.

Rain sighed down the sides of the stone church.
Storms sailed by all day in battle fleets.
At five o'clock, when we tried to see the sun, the speechless visitor
Sighed and arose and shook the humus from his feet
And with his trident stirred our trees
And left down-wood, shaking some drops upon the ground.

Thus copper flames fall, tongues of fire fall
The leaves in hundreds fall upon his passing
While night sends down her dreadnought darkness
Upon this spurious Pentecost.

And the Melchizedek of our year's end
Who came without a parent, leaves without a trace,
And rain comes rattling down upon our forest
Like the doors of a country jail.
at 1:33 PM