The end of Haidt

I finished Jonathan Haidt's Righteous Mind. He gives a very helpful set of conclusions which summarize his main points. A few among them:

There are six foundations of morality
Morality binds, and blinds.  He values religion as allowing large groups of unrelated people to engage in community building.

Haidt's research into tens of thousands of people's responses to various questions creates the following three models showing the relative emphases given to the six foundations by US Liberals, Libertarians and Conservatives. 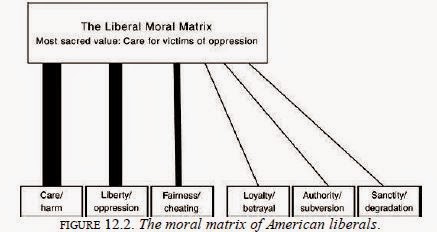 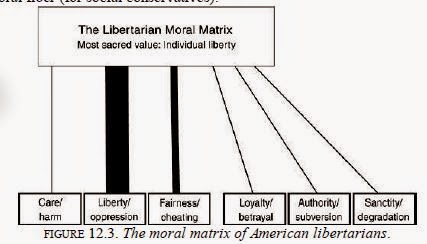 Apparently Libertarians are pretty much just Liberals without a heart...

Although, of course, I don't buy everything Professor Haidt is offering, I am glad to have read his work. And he sorta endeared himself to me when, a Liberal himself, he described the sometimes blind Liberal attitude toward "sacralized victim groups."