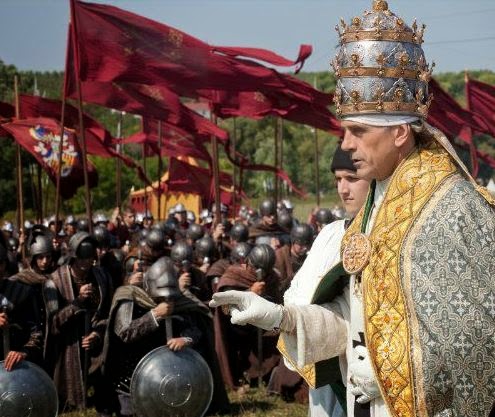 Modern popes can no more imagine themselves declaring a crusade against the Muslims then the medieval ones would be capable of understanding the supine and craven appeasement of their successors towards Mohammed's soldiers.

The modern ones take the existence of the United Nations as a providential good just as much as the former ones naturally created The Holy League to destroy the Turks.

The traditional ones cared about triumph of the Faith and the Church, while the newer ones blather on blandly about "the universal dignity of the human person." And my favorite Catholic "social justice" bloviation: the preferential option for the poor. (Really, wtf is a "preferential option?")

The ancient popes assumed that being Roman Catholic and being European were virtually synonymous; these days their spiritual descendants are happily promoting the destruction of Europe by invasion from Africa and by the very Islam they used to resist, pitching it to us a duty and asking us to be happy about it.

Why not have mandatory, tax-funded collegiate programs for all of the thugs in prison? That could consolidate like a credit balance between two cards. Though, I should inform you about the unspoken rule that actually trying to solve the problem is you hiding behind your privilege to avoid admitting that you personally are a racist. That will immediately negate any real good you ever manage to do.