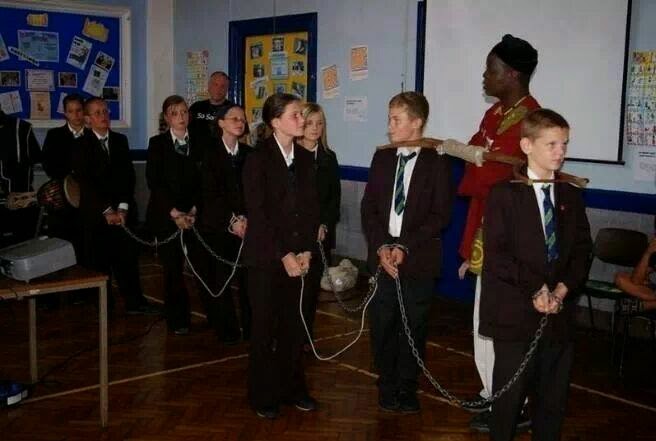 The White "Man"'s T-Shirt in the background says So Sorry
as the little Eloi line up for their ritual shaming.
Sorry indeed.
It was other Blacks who enslaved their fellows
and sold them to the Whites.
The Western Slave Trade depended entirely
on the enslaving practices of Africans on each other.
(The massive Arab Slave trade was Arab run.
The Muslims will never apologize or allow themselves to be so
disgustingly humiliated by their subalterns.)

Group "privilege" is just another name for "culture". It is universal, unavoidable and indeed necessary to group survival and social coherence. If you have some, hang on to it because "privilege" will not fade away; it will simply migrate away from you to another group. Much of it already has.

Group success depends on three things: power, wealth and status. Whites once had unquestioned dominance in all three. Now we have reduced power, our wealth is being sucked away, but very clearly we have no status. None. How can I say that? In any situation, any, where a non-White person or group cries "racism" or "bias" or "privilege", the White is automatically guilty, no matter what he says. Always. Black "privilege" always grants the moral high ground, the victim role, to Blacks, any Blacks, no matter how vile. We have given up our moral standing and allowed deeply dysfunctional and vengeful minorities to make us play their game, which will eventuate in our suicide.

St Martin Luther King managed to find the White Man's soft spot and convinced him that he was the most evil creature in history. The descendants of the greatest civilization in history were merely talked into surrendering. Then White Women turned around and stabbed their men in the back. Now all the smaller scavengers gather round to pick apart the corpse.

I used to think that the phrase race-traitor had no meaning. I no longer agree with my earlier self. If I were both evil and powerful --and alas, I am only one of the two-- I'd take the whole lot of these conference-goers and internally exile them to darkest Detroit and then watch the fun unfold. Whites are without question

The Most Foolish People On The Planet (c).

Self-debasement as liturgy; politics as theater.
Pathetic and useless-pretty much a religious act; Mainline Protestantism gone to seed.