The United States of Balkania 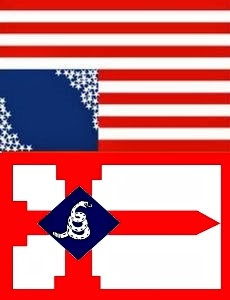 Allowing for cognitive bias, I see nothing on the horizon that makes my scenario of America's dismantling less likely as time goes on.

I have sort of settled into seeing people as proto-citizens of new countries. It makes a lot more sense of their beliefs, attitudes and behavior.

Looking back, I begin to think how odd, if not crazy, it was and is to imagine that peoples so adversarially different from each other could ever have been considered fellow-countrymen just because they find themselves inside the same borders.

Men as opposite from each other as Jefferson and Lincoln both knew this.
===
at 6:43 AM

Took me a second to realize what I was looking at: a map of the United States during the Civil War. My world-building tendencies drive me to take a stab as to what the continent would look like if this political geography ever came to pass again.

The blue states would be the United States of America, which drifts ever closer towards a Orwellian police state, further eroding personal freedoms in the very name of freedom. California, Oregon, and Nevada would either be geographically separated yet politically united with the U.S., or they would emerge as the seperate-yet-allied nation of the People's Republic of California.

The Confederacy would rise again due to differences on social issues and government power. The climate would be socially and religiously conservative, perhaps even a little reactionary, but the establishment of marriage as a straights only institution would decrease fear of homosexual infiltration, and homosexuality eventually would be tolerated with a shrug and an eye-roll, as long as they "keep their shenanigans in the house."

Kansas and the slave-holding Union states would be officially part of the United States, but would act as something of a neutral-ground buffer between the United and Confederate States due to having closer cultural ties to the Confederates. Politics in those states would revolve around whether to stay in the Union or join the Confederacy.

The states that made up the old Union territories, sandwiched between the two halves of the U.S., would publicly ally with the U.S. out of convenience and a sense of duty to the old order, but they would be deeply opposed to the U.S.'s totalitarian policies.

The Confederate territories pose a challenge to predict. My money is on them becoming some sort of Aztlan Republic thanks to burgeoning Latino immigration and Mexican ultranationalist activities. This country would be in a state of perpetual war with the C.S. to "reclaim" Texas, making Texas' immigration policy some of the most draconian in the country. The P.R.C. would face internal instability due to a high Latino population that desired union with Aztlan, possibly resulting in rebellion and secession.