Being Human US is rolling down to its justified finale. Watching these hyper-moralistic heterosexual males --be they vampire or werewolf-- being dominated and dragged around by their completely un-self-reflective gender-narcissist females is deeply offputting.

The Ghostess is a hot mess, SuperEve everyday, constantly wrecking Paradise. The blondie werewolf wife is a labile cold-hearted bitch. They turn a drama series into a soap opera.

Kinda like watching our whole society in a shell of nuts. As Mr Donovan so pithily put it, A society dominated by women and effeminates cannot survive.

The moral pitch throughout the show is a kind of groundless leap-frogging, where scads of ethical angst are invested in strangers, --this being the coin of the moral realm for Liberals--while friends are regularly mistreated. In this respect, the Being Human US reflects its makers and our society

But in keeping with my shallowness, Sam Witwer in a towel partly makes up for this. 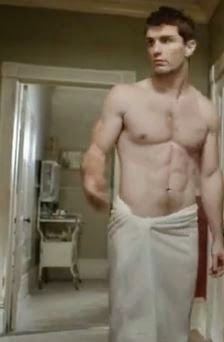 And, spoiler follows...having the Ghostess inhabit the body of a big bald homely overweight Black guy so Aidan the Vampire and He/She could kiss...well, that took some imagination.

Sam Huntington, the actor playing the character-crippled Jewish werewolf,  has been to the gym and they're showing him in skin a lot this season. But "Josh" is so irredeemably pussified that nothing can make him less than pathetic.

I'll miss Sam Witwer. No one else.

Ah yes, Sally. She was tolerable in the first season, what with the "my fiancé murdered me" plot line, but her chronic inability to learn the lesson "You're powers have consequences, don't abuse them" in the second season turned my off to the show outright. Kept waiting for somebody to exorcise her for good.

Is it just me, or were all the women in that show absolutely unlikable? The vampire girlfriend (both of them, in fact), Sally, Nora, that medium chick who put the ghosts in the newborns. They were all either self-righteous witches or selfish hags who didn't care who got hurt by their childish shenanigans. Or worse, both at once.

Now, if they had decided to make the show a gay romance between Aidan and Sam, and dump the ladies altogether… I would have watched the crap out of that. :)

The women, with the possible exception of Cat, have all been unlikeable. At least to troglodytes like you and me. I'm sure many people see them as "strong and empowered."

Except for Bishop, all the male leads have been led around by their gonads by these dames. Aidan only seems somewhat less pussified than Josh largly because he's so good looking.

It was an interesting premise and I kept waiting for the show to overcome the character limits, but now we'll just see it all fade away.

As for the alternate romance, welcome to the world of slash fiction: https://www.fanfiction.net/community/Aidan-and-Josh-Slash/89261/