My warmhearted but righteous friend Bill (not B: he's coldhearted and morally lax) mentioned DW Griffith's "racist" 1915 film Birth of A Nation. I asked if he had seen it and of course he hadn't. I have. Just this past year.

And yesterday I watched Triumph of the Will, Leni Riefenstahl's film of the 1934 Nuremburg rallies.

Birth of a Nation was originally called The Clansman, after the novel. It is the story of the Civil War and especially of Reconstruction and the origins of the Klan, from a White Southerner's point of view. Its portrayal of Blacks is first of slaves, of course, but then, after the War, of savagely ignorant incompetents and vilely destructive tyrants given power by the vengeful North. If anything, it makes the consequent Jim Crow regime understandable.

Such portrayal is universally condemned as "racist". However, if the results of Black rule in places like Detroit are any indication, it might be re-considered as more of a documentary than fiction. 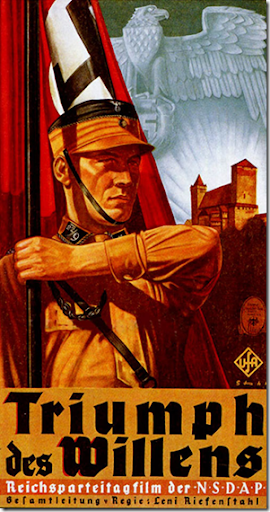 As for Reifenstahl's piece, parts of it are quite stirring. You see the masses of young German men --with numerous shots of individuals and small groups-- full of energy and pride. The background of World War I and Germany's suffering under the Treaty of Versailles is assumed and the contrast is powerful. For a while, even Hitler looks compelling. The intense adoration of the crowds, with the massive sets and rituals, seems to pervade him physically and he really does seem like a savior rather than the madman of the later years.

His speeches, however, are pretty simple: all about youth and pride and unity and  loyalty and the Volk and Deutschland. Over and over. And over. And when the theme of Hitler = the Party = Germany, all that Fuhrer worship, begins, I start to roll my eyes.

For a man of 21st century attention span, both movies are far too long.

As for Pasolini's Salo, I've already seen it. Ages ago on VCR. It is as deeply creepy and revolting as advertised. I doubt if I managed to watch the whole thing.

I do have my limits.

Mr. exCathedra might enjoy "Elf."
The scene in Santa's toyshop when the 'elf' realizes he may never fit in up in the North Pole reflects much of the core of exCathedra's belief system.

Thumbs up.
Best Christmas movie ever.

"As for Pasolini's Salo, I've already seen it. Ages ago on VCR. It is as deeply creepy and revolting as advertised. I doubt if I managed to watch the whole thing."

I certainly never managed to /read/ the whole thing. Strangely my clearest memory of it isn't any of the vile acts (which seem to blend into each other) but rather of one of the aged storyteller-whores who happily bragged to her audience "I have never wiped my arse once in my entire life!" The story is very filthy, in the ordinary sense.