April 1st, the Feast of Fools.
I have already been fooled twice...that I know of.

The Orthodox even have a special category of saints, along with apostles, martyrs, virgins, etc:
Fools-for-Christ.


And Holy Thursday, first of the Threedays.

The Office of Tenebrae,
Shadows The Mass of Chrism, blessing the sacred oils for baptism, sealing, ordination and death.

The Mass of the Lord's Supper

with the Footwashing, the Mandatum.* 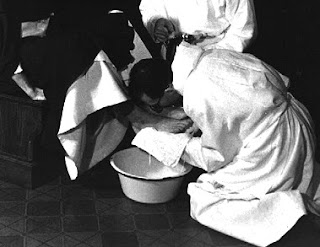 The Altar of Repose 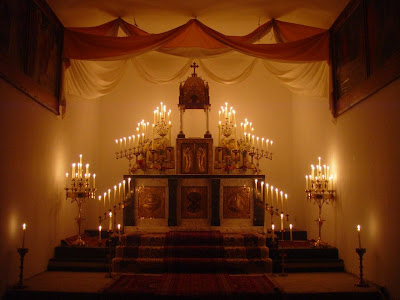 And the first day of the month of which TS Eliot wrote in his 1922 Wasteland:

“April is the cruelest month,

breeding lilacs out of the dead land,

* When I have given thought to how two men might ritualize a bonding for life, it has seemed to me that washing each other's feet would be a right Christian symbol, and one that did not depend on the male-female marriage ceremony. I have taken part in this ritual on Holy Thursday many times, both as foot washer and as one of those being washed. It is very intimate and physical, quite moving. From what I know of married men and women, it strikes me that mutual footwashing would not be a bad sacramental sign for them, either.