The West, the best and the rest

Further thoughts on race and culture in PC Land. 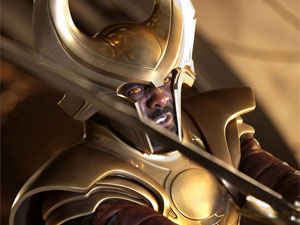 Heimdall, "The Whitest of the Gods", in Kenneth Branagh's Thor

The “color-blind casting” (i.e. deliberately putting non-Whites in White roles) that Branagh uses here and in his Shakespeare adaptations actually reinforces the institutional racism true leftists decry and movement conservatives defend (so long as they take care to note that there is no link between the culture and the people who created it). Classic Western texts and even bastardized pop culture based on Western traditions belong to everyone on Earth because they are the best that can be produced and echo universal themes, whereas non-Western religions, themes, and even pop culture are only relevant to their own peoples. Seeing the college brochure version of Asgard reminds us of the impossibility of a “color blind casting” for tales based on the likes of Baron Samedi. Filling a world based on ancient Western concepts of honor, duty, hierarchy, and tradition with random tokens is in a way a strange form of tribute.

Yeah, I wonder why Kurasawa didn't fill his samurai cinema with Swedes and Africans?

Reminds me of a conflict I once had with my ex T, a Black man. We went to see the Alvin Ailey Dance Theatre. They did his Revelations in the first part and after intermission, a piece from the classical Russian ballet Giselle. I made the "mistake" of opining that while the troupe did a wonderful job with the first piece, they looked odd doing the second. It was not a question of talent --and in any case I am no expert at all here-- but of match. Of course, he said I was being racist. When I replied that a bunch of Russians would look equally out of placing doing Revelations, his answer, was, "That's different."

As Dead White European Male Bill Shakespeare wrote, "Ay, there's the rub." I still think a Black troupe prancing around like Muscovy princesses is as silly as an all-Chicano film version of Jane Austen. But ballet is part of the Western high cultural tradition. Being excluded from it means not belonging. And every form of exclusion, to Blacks --and other victim groups, including wymyn--, is a mark of their inferiority and of the superiority of the Whites. Hence, no matter how silly the result, they would demand access.**

As Kirkpatrick says above, the cultural productions of the victim groups are theirs; if Whites try to participate, they are accused of "cultural appropriation". But the culture of the Western white men (I say men because men are hugely the creators of high culture) must be declared common property. One effect of this is that it dispossesses Whites of anything valuable and proper to them because that would be exclusionary discrimination. Whites are welcome, of course, to anything the New Order deems damaged or evil. In fact, these things are considered to be specially and uniquely ours. The price to be paid for achievement is erasure. The art is valued, but the people and culture that created it is demeaned. By their descendants.

With the growth of the transnational fantasy, cultural global citizenship, etc. we are asked to consider the quite particular cultural products of Africa, India*, Japan, etc. as our common inheritance, but in a quite particular form: unadulterated in the original, precisely in their ethnic and racial particularity, but accepted by us, as such, as equal to our Western canon. When it comes to Western art, however, it is a requirement for its acceptability that it be, like Woolworth's lunch counter, de-segregated, de-Whited. Otherwise, it would be unassimilable, oppressive and without excuse.

So while we must endure Whoopi Goldberg as a banshee***, Idris Elba as Heimdall (pic above) and Patricia Velasquez as the Norse giantess, don't wait around for the day when the Beijing Opera will be peopled with the daughters of Albion.

*There is an English version of the Mahabarata with a multi-racial and ethnic cast. But it was produced by very White Brit Peter Brooks. In Brooklyn.

** More than one person has suspected that the drive for gay marriage is not built on a desire of most gays to marry, but to break into an exclusionary institution that would have the effect of granting them societal approval, status and belonging; that it's not marriage but what marriage represents that is the prize.

***Or Whoopi Goldberg at all. She was once, like Margaret Cho, a talented comedian but has devolved, like MC, into a bitter and predictable ideologue.
at 5:59 PM

Multiculturism - all cultures are good -except the West which is evil.