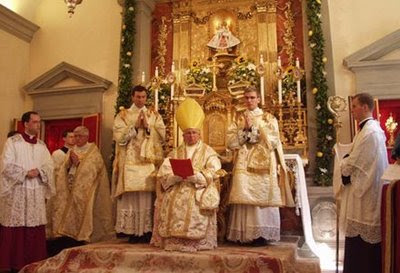 Part of my religious meanderings in cyberspace include visits to two blogs on the opposite sides of the Catholic ritual and cultural wars.

New Liturgical Movement, despite its title, is firmly anchored in the pre-Vatican II past. Pray Tell is full of attachment to the reformed liturgy and its attendant theological and practical changes. Some days you'd think that for the former, nothing good happened after 1965 and for the latter, nothing good before that.

The Pray Tellers largely work themselves into piques and knots and furies over the upcoming re-translation of the Mass into more formal, sacral and Latinish English. The NLMer's pine for the expansion of the old Latin rites. Pope Benedict's unlocking of this option in the last few years (and days) has made them as happy and hopeful as it has made their fellow Catholic opponents angry and depressed.

For each group, a quite different vision of Catholicism inhabits their ceremonies and that, I believe, is at the source of their differences. The old Latin phrase describes it: Lex orandi legem credendi statuat. Loosely, How you worship shapes what you believe. For the Pray Tellers, the liberal establishment, --ecumenical, feminist and volkishly lay--, with its magisterium of academics and liturgists, is really the only kind of Church they can tolerate. One fella in particular, a brilliant Irish Boomer priest who teaches literature in Japan (!), gives the voluble and bombastic impression that prior to Vatican II there was nothing but A Huge Mistake. God said, "Let John XXIII be, and all was light." On the other side of the transept, the younger men --hardly a female voice there-- of NLM, fans of "the reform of the reform", are passionately loyal to the papal magisterium and to the Tridentine rituals as containers of tradition, which always gets the the practically obsessive-compulsive benefit of the doubt.

There are still things I miss about the practicing Catholic life. Obviously, or I wouldn't be so interested. But the kind of battle these folks engage in is not one of them.
at 2:41 PM