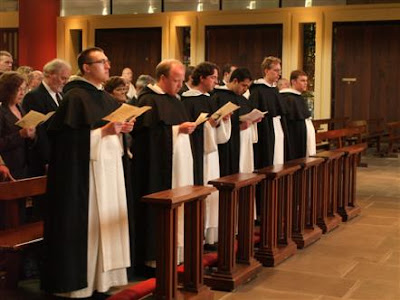 The Dominican Order's General Chapter, its triennial supreme authority, consisting of 130 friars, elected friar Bruno Cadoré, a physician and bioethicist, of the Province of France, as Master of the Order. As the 86th successor to St. Dominic Guzman, who died in 1221, this unbroken succession is older than the Dalai Lama's. Masters of the Order are, however, elected for a specific term, rather than reincarnated for this lifetime.

For those of you interested in the niceties, a friar and a monk are different. Monks typically are focused on the life of the one monastery where they live and work for their whole lives. Liturgical prayer is their priority, along with manual labor. In Christianity, they got started in the Egyptian desert in the 4th century; the major Western form of monasticism is St Benedict's, whose 6th century rule is the classic. In the 13th century, people like St Francis and St Dominic took that tradition and altered it, making friars, who are a kind of mobile monk with an extraverted task. They belong to Orders and can move from house to house. Although they keep a lot of monastic customs, they interact with people in various kinds of ministries. Dominicans, for instance, are actually called Ordo Praedicatorum, the Order of Preachers. Studying and preaching are what their work is. And they look pretty cool.

And in the Dominican Order, all offices are elected and there are term-limits. Since 1216.
at 11:10 AM