The Sons of Europa

I have been reading through, once again, cultural astrologer (!) Richard Tarnas' 1991 The Passion of the Western Mind. He gives a pretty good outline of the dualism at the heart of Western culture, which is well symbolized by the pairing of Plato and Aristotle in the center of Raphael's School of Athens. 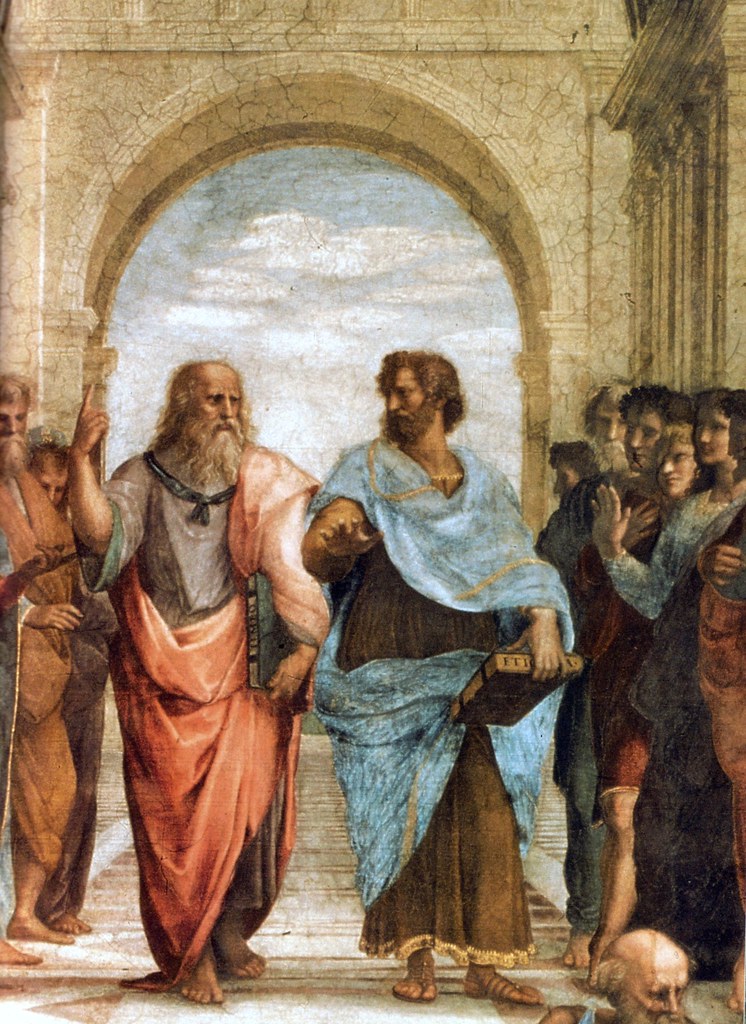 There is the empirical, skeptical, rational side and there is the universalizing, mystical side.

Raymond Nogar, a Dominican who worked in the field of evolution and theology, pointed out the Western and indeed the universal conundrum of how to endure "the terrors of history" without emptying them of meaning by escape into a myth of cosmic harmony.

Ancestral religions focus on kinship, so that suffering and death are simply accepted as an inevitable part of the flow of family history. A tragic vision of life is normal, with no alternative seriously considered. The horizon is very modest and very realistic. Being honorably gathered to the ancestors in some form is the most that most could hope for, with the hero being more closely associated with the gods...who are themselves, in all ancestral faiths that I know of, subject to Fate.

Dharmic and sapiential religions make history a mere means to an end, which is Indic or Taoist dissolution into the Original One or, in the atheist paths of Gautama and the Jains, dissolution altogether. History can have no meaning, really, since extinction of history and its illusions is the goal.

The prophetic religions of the Middle Eastern prophets --Zarathustra, Moses, Jesus and Mohammed--are the ones who ramp up the history problem the most. Ethical monotheism is where the issues of suffering, evil and loss become most psychologically acute. In a world created freely and purposefully by a Single Beneficent Will, and where humans have only a single lifetime to determine their eternal estate, the contradictions of death and blood are magnified. This crunch creates Gnostics...and atheists.


What kind of post-Christian and post-imperial faith can avoid the "pretty lies" of so much spiritual yammering and yet provide a robust sense of hope and purpose for this life while not being limited to this life alone?

Empiricism and rationality vs mysticism and cosmic meaning...Nihilism vs Utopia*.

*Secular Humanist Liberalism --our current ascending religion-- offers the worst of both worlds, being fundamentally nihilist and rabidly utopian. When you ponder on it for more than a minute, a world of universal equality really becomes a kind of hell through boredom.

I do not know if we are looking at it from the same angle or not but, I find the material world to be very mystical. Why can't we have myth that is ultimately just metaphor? Can't we tell a story so well that metaphor and factual events or truths are blurred? I also consider nihilism and utopianism to be (to use Satanic lingo...) a false dichotomy. This is the reason why I think what is salvageable from Catholicism should be applied to a more Pagan religion. The NWE Pagans were very cynical but managed to find meaning in the harshness of life. Have Catholics not dome the same with the Saints and suffering. I really need to do my own damn homework so I can better help with making a good template for a new religion. I am unfortunately ignorant of a lot. However, when it comes to the virtues of Catholicism, it is in the ritual and the real world wisdom as well as speculation about the Nature of the Divine, which could be considered what makes the cruelty of Nature inherently moral versus the cruelty of folly laden mankind. Still, not being as unread as I am would really help me better in understanding what I really find beautiful about Catholicism (even if it is something entirely superficial) and the likely mountainous impasse you have been met with. The boulder that God cannot lift. (is that just a Baptist bullshit hypothetical to try and convert people or is that based in real scripture?)