In praise of folly

Every religion has a name for transgressions of the sacred. In Christianity it is called sin.

During my most active Gnostic period, I came to see the divine-human relationship in Christianity as primarily political one: resolving the legal problem of a separation from and enmity between the human race and the Divine over rebellion and disobedience. Sin is failure to comply with the primary directives of an overlord by his underlings.

In this context, Christ --and his cross and resurrection-- becomes substitutionary atonement, the payment of a fine in blood and pain...And in the Augustinian and Anselmian West, this requires the blood and pain of a divine being to match the offense against an infinitely divine being...

How could the life and death of Christ be assimilated and uplifted (the Hegelian Aufhebung) if the real issue in the divine-human relationship were located elsewhere?

In line with my sense that we have become The Most Foolish People On The Planet (c), the primary form of transgression against the sacred in a future Euro faith might very well be not sin but foolishness...folly. 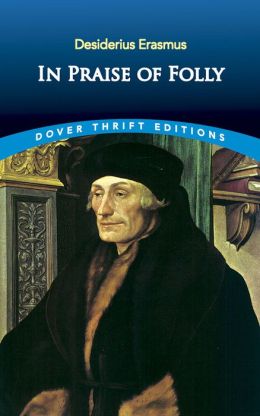 Our religion's task --well, one of them-- is to cure us of our folly more than, or even rather than, to cleanse us of our sins. Every religion must deal with both moral transgressions and ritual impurity, but not every religion places its center of gravity in the same field.

The work of Gnosis, the centerpiece of the Gnostic religion, is a new consciousness, a transformative awareness, that cures the three symptoms of our fallen state: exile, bondage and illusion. To transfer these ideas from a strictly Gnostic frame to a Euro faith frame, these would be alienation from one's true self and home, compulsive action and lack of freedom, and believing the lies of a regime founded on lies. These interacting defects leave us divided within and among ourselves, diminished both in possibility and in actualty, and deluded as to the truth of our situation. Together, they constitute folly, disconnection from reality and good sense.

(My praise of folly, with apologies to Desiderius Erasmus, is obviously not of folly as such, but of folly as the fundamental negative moral category of a new faith, displacing the centrality of sin, especially as Western Christianity has framed it, a theme only magnified and exacerbated since the Reformation.)

From my study of Anton LeVay's brand of Satanism, ignorance and stupidity rank quite highly as transgressions in the Church of Satan. They don't seem like they suffer fools lightly. They may be a useful group to study for this endeavor.

Did you know that Mr Donovan used to be a Satanic priest?

It was never what I most highly esteemed in him. My impression, and correct me if I am off base, is that it is a mythologized version of Ayn Rand, --not necessarily genetically but coincidentally--a celebration of ego by atheists.

I am not anti-ego, in its right place, but LaVay et Co. can serve as one example of the antitheses against Christianity. I am trying to imagine the bare outlines of a synthesis, one that could possible bind together both disparate elements in a 2800 year old history and the disparate people who have been created by it.

Not surprisingly, I like the use of myth and ritual by the LeVayans, in principle if not in performance, but the voice of ego is way too loud.

What do you think?

I rather like LaVey's work. The Satanic Bible is very similar in opening to a NeoReactionary work. Of course, the left hand path does not take too terribly kindly to reactionaries of any kind. LaVey was likely much different but his loyal heirs to his intellectual tradition are really quite liberal. LaVey based many of his assumptions off of a universe in which Catholicism as we know it does not exist and that there is ultimately no difference between the Catholics and the Calvinists. They are not a bad bunch of people but they talk a big game. They are ultimately unwilling to take their visceral assumptions to their most natural conclusions and avidly support a pluralistic society.

As for ego, that is all they really believe to exist. They are open to possible preternatural truths but, they are autodeists. They make this statement frequently.

I am not against the idea of being skeptical of the preternatural and supernatural but, I just do not like the left hand path very much at all. In regards to learning from the Satanists with how the treat folly, they cave into it all of the time. They are not willing to break from liberal ideas about race and sex, even if they admit that equality is a myth and there are bound to be differences between men and women are a far cry from looking down on the house wife and mother, they are trapped in a narrow tunnel vision in order to continue supporting their autodiest values. They seek to make them public policy. Very Randian, they do not believe that there can be a unifying culture that is not irredeemably flawed and assume that everyone can pursue their own interests legitimately.

Ex, I was aware of Donovan's previous membership with the Church of Satan. But as you are probably aware, he's made his switch to Northern European neopaganism.

Yes. Last time I saw him we had a very brief discussion about it. He's a constitutional atheist and sees the gods as images of energy, etc but it's part of a larger project for him. as was, I think, the LaVey period.

LaVey and Satanism have a way of speaking to someone when it is ultimately the only group willing to not get moralist and to deny equality as anything other than a myth. When one grows up as sees that there is more to the very particular tunnel vision that Satanism holds, that there is more than the dull world of the Satanist, they begin to have the ability to judge such heavy content for themselves. I bet all Satanists come to it in late adolescence.